For a couple of years now I have been thinking about wargaming the 2nd Anglo-Boer War 1899-1902. I had wanted to get into colonial wargaming for some time, but also wanted more equal forces than you normally get in colonial wargaming. My friend Frank and I dabbled a bit with a Pathan Revolt 1897 game, where I had adapted the Lion Rampant rules, but it somehow did not grab us.

Without a doubt this is one of the most overlooked conflicts, which I think is because gamers are unsure about whether it is a colonial game or like WW1. The answer, at least if you want to play the first phase of the war - the conventional war, that it is very much it's own thing. The second phase of the war  - the guerilla war, is no different than other guerilla wars. So the first thing I needed to find out was which type of game I wanted. This would also have an impact on the miniatures size.

Now I have never painted anything other than 28mm, so I was vary about smaller size being able to show the character or whether it would just look like small lumps of metal with paint on them.

I decided that the guerilla war phase was what I wanted so what rules to use?

Now I have gone back and forth about which rules and minis to use, so this is only a brief intro into some of the "dilemmas" I discussed with my friend Eric, my girlfriend Julie and of course myself.

TooFatLardies also had some playtesting of their now released 2nd Boer War rules, which further peaked my interest. At the time the rules had not be released, but it was clear that they very not intended for large skirmishes, but rather bigger forces using 6mm figures.

When the rules were released with Christmas Special 2016 publication, I eagerly read through them hoping that they might be usable for the guerilla war phase afterall. They did not. Now my knowledge of the 2nd Boer War is by no means large, but this is by far the best and most historically correct rule set for the conflict I have come across. I might try them out later.

At the same time I was looking at rules I looked at minis, more specifically miniature sizes. I read good things about the large range of 10mm Pendraken Boer War miniatures. I enquired about some photos on their forum as none were available on their website, and ended up getting a free sample of 9 foot and 2 cavalry models - this is customer service at it's best.

I was still looking at 28mm as this was what I had always painted, and while there are some ranges out there, there were still some things that I was vary about. Old Glory's range is good, but I read that their figures have weird poses and the sculpts are not that good. Foundry's quality is good, but the range is not that big and I was unsure whether they would mix well with other minis.

My sample arrived and after some research about how to paint 10mm I got to it. Once the minis were primed and given a wash the details stood out, and I was pleasantly surprised, I could still make out the different features of each mini. I got painting and within two hours I had painted all 9 foot and was quite please with the result. The task was not as daunting as I thought. 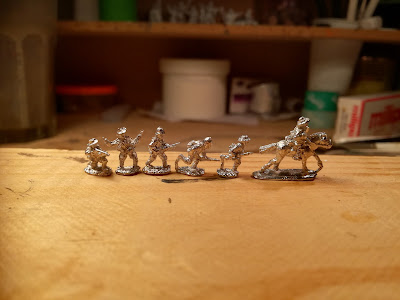 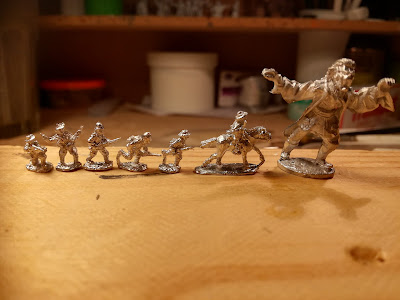 Next to a 28mm figure for comparison 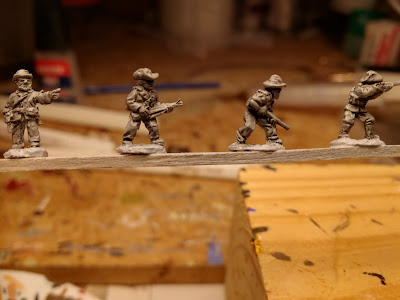 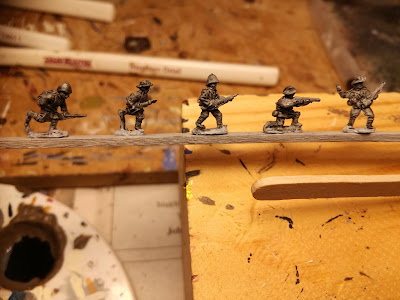 Primed British with a wash 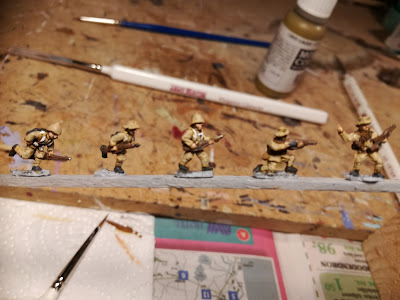 British all painted up 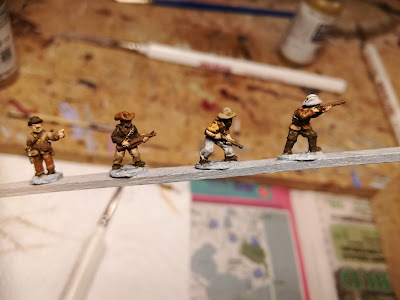 Boers all painted up


So what did I end up with?

I wanted a rule set that was generic enough so that I could tailor it to the 2nd Boer War, and without a million minis on the table - I was looking for something similar in size to Sharp Practice 2 and Chain of Command. Having purchased The Men Who Would Be Kings when it was released I sat down to reread it and came to the conclusion that this would be perfect. So working on the force list for the 1st Boer War as a base and some wonderful discussions on The Men Who Would Be Kings fan FB group, I have come up with troop types that I think will work - a future post will detail this.

Miniture wise I had decided that 28mm would be the way to go despite my positive experience on painting 10mm. I soon came back to the same problem of which company's minis I should get. Again both the The Men Who Would Be Kings and lead-adventure.de were extremely helpful in providing pictures and comments, but I was still unsure. Going for 28mm would also mean that I would only be working with half sized units (termed Skirmish Kings) in the rules, as my budget for this is not huge.

So after some careful consideration I decided that I could get all that I needed to play 10mm full sized units for a third of the money to play with 28mm half sized units. That made it an easy decision in the end and I placed an order with Pendraken, which in the end also included a few farms and a block house.

My painting table so be free (some WW2 Russians for Chain of Command is currently occupying it) by the time the order arrives and I am really looking forward to getting to work on them and of course some suitable terrain as well.