For Christmas I was happily surprised that my girlfriend had arranged for me to get some of the new carriages for Empire of the Dead. Since my favourite faction is Supernatural Branch I had put the Black Mariah on my wish-list and the Streets of London set is just superb value for money.

Here they are after I assembled them. 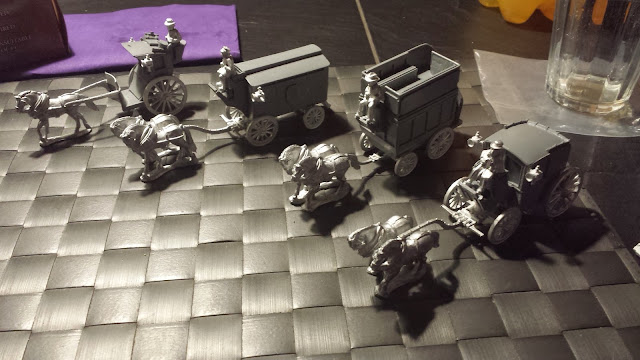 Each set is both resin and white metal. The carriages themselves are made from resin, while the axels, wheels, horses, drivers, heads and lamps are white metal. I’m still surprised at how relatively heavy resin is. The windows of the London Omnibus and the Gentlemen’s Coach don’t have drapes, which I actually thought, but I guess they have just been painted on.

Each of the carriages in the Streets of London set comes with the same 4 heads, so that you can put whichever one you like onto the body. 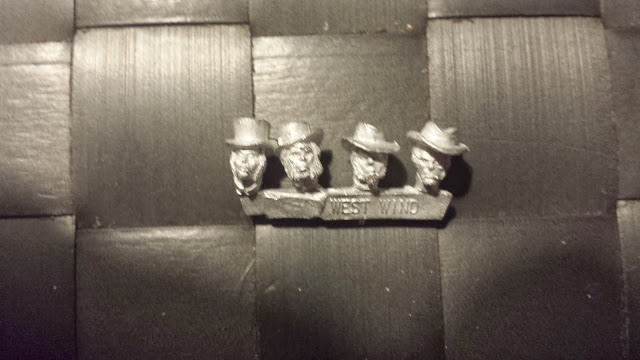 The torsos and legs are different, with the legs for the Hansom Cab driver actually being part of the resin carriage. Inside the Hansom Cab there are two passengers sculpted out of the resin. They don’t look good and lack a lot of detail, so I’m not sure whether I will just leave it black so that it looks like the passenger seats are empty. 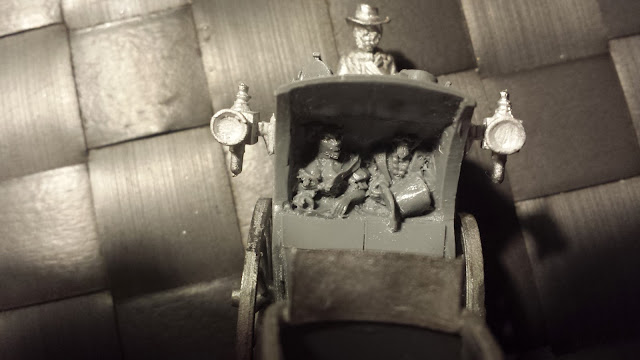 The horses are for the London Omnibus and Gentlemen’s Coach are not the ones pictured on the box itself. The pictured horses gallop while the ones that are actually in the box are just walking. 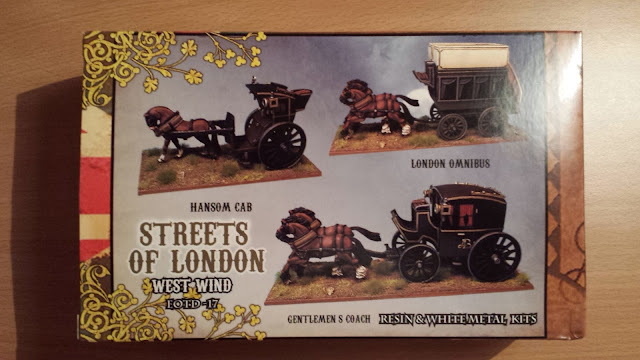 Individually each white metal part is detailed and with a minimum of mould lines. The same goes for the resin carriages. However, if you place the resin carriages on a flat table and look at them from behind you can see that they are not completely proportionate. While it is not much it is still annoying to the eye. Most of it can however be fixed by slightly offsetting the wheels, but in the case of the Black Mariah the back door is leaning a bit to the side. Small problems, but still annoying.

The real problems come when you try to assemble each carriage. The posted images on theRequiem Kickstarter of the axles are invaluable and you really should have them in front of you when you begin. Though in the case of the Gentlemen’s Coach and Hansom Cab you still have to figure out how the springs fit behind the wheels.

The problem is the large wheels and their axles on the London Omnibus, Black Mariah and Gentlemen’s Coach. All three carriages comes with a set of large and small wheels. If you just glue them underneath the resin carriage, the carriage itself will lean forward because the large wheels are set too low. In the case of the London Omnibus it was so bad that I had to file away 2-3 mm for it to look nice and prevent it from looking like it is leaning forward. 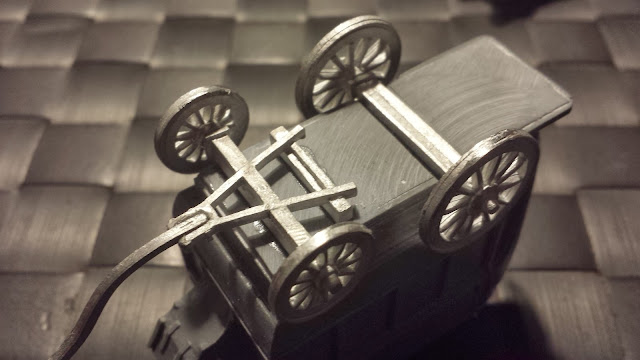 There are also no obvious way to attach the horses to the carriage, and it might require a bit of extra white metal to make it look nice. But I will have to look into that when I actually try to base them. For the pictures I have just placed them where I believe that they should be. 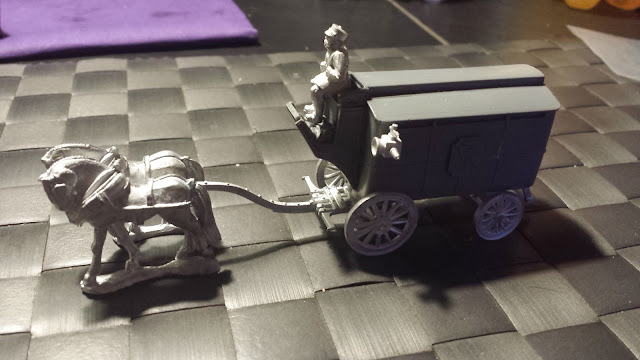 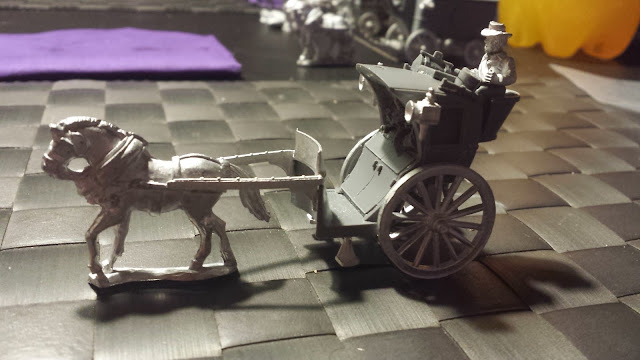 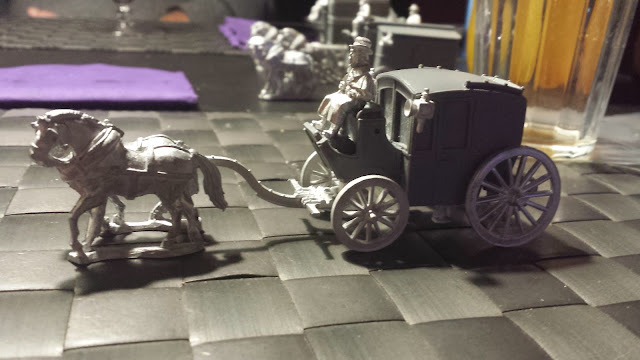 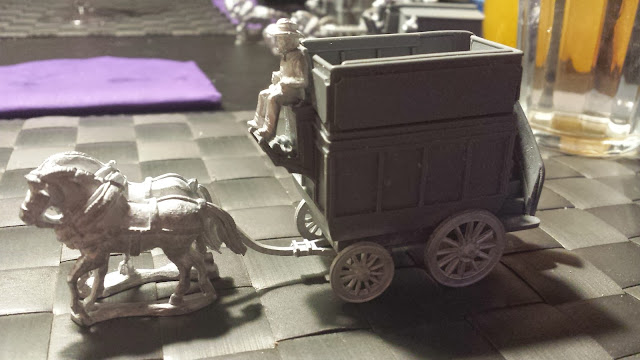 Despite the challenges of the axles and large wheels, I still think the carriages look good when assembled. I have never assembled carriages like this before, so I don't know whether it is just me being picky, just make sure that you have your files ready, because you’ll need them.
Posted by Kaspar Olesen at 10:29 6 comments:

The Christmas holiday for me was in large parts spent packing, as I’m getting a new flat in late January. In the meantime I’m staying partly with my girlfriend and my parents. I did however manage to squeeze in two games of Empire of the Dead with my friend Jon.

It had been quite a while since Jon had played, so we decided to start two new factions. I was eager to try out my newly painted Brotherhood, and Jon chose the Sons of the Empire subfaction of the Gentlemen’s Club.

We chose the normal 150 shillings to begin our factions. Jon’s SotE consisted of a president, vice-president and 4 members with various weapons. For my Brotherhood I chose a Deacon, Knight Marshall and 4 brothers.

Lost Artifact
For our first game we wanted something simple so we picked the Lost Artifact scenario, and Jon rolled the dice so that we had seven markers! We then rolled Corner Deployment, which meant that there was a risk of major battles all over the board. I won the roll for day/night and chose night, since I knew the Sons of the Empire gents would have far more long range weapons than me.

For my experiences the last time I played with Chris, I suggested that we played with alternating activation instead of the normal IGOUGO rules of the game.

The first round was spent getting into postion, but Jon managed to get a few shots of against my brothers, but could not get a hit.

The next few rounds resulted in several skirmishes around the board, and Jon lost a member and I lost a brother. The first four markers also proved to be fakes, but there were still three left.

Beginning with round 4 Jon moved his President into base contact with a marker and rolled a 9. Bad news for me as I only had my Deacon and one brother anywhere near him. It was going to be a difficult for me to get two his President and claim the artefact. My brother closest to the President fired his Volley gun, but only managed to remove a Wound. When it was my turn again I then moved my Deacon onto one of the pier, since I knew Jon needed to go the other one in order to escape with artefact. The position on the pier would be my only chance to fire a decisive shot at him. Across the board my Knight Marshall managed to kill another member.

Round 5 came and Jon managed to put my Knight Marshall Down, however one of my brothers was successful in killing of a third of Jon’s members, which meant that his Sons of the Empire had reached their Breaking Point.

Round 6 started with Jon rolling for his remaining Sons and his dice really deserted him. Despite the Sons of the Empire having +1 to their Bravado scores he rolled a 2 for his President and his last remaining member also fled, with only his Vice-president making the Bravado check.

So despite being in a bad position, I had managed to turn a loss into a draw by removing his members from play. The game had a nice climactic feel to it, since I knew I would be in a position to get an Aimed Shot of at his President even if he made the Bravado check.

I had only lost a single brother, but my Knight Marshall was Down.

As I recall Jon was more lucky with his rolls and got an Eye Injury and a Leg Injury for two of his members, the third member came back unscathed.

I then spend 20 shillings on rolling for my Deacon on the skills list and my Knight Marshall on the Attribute list. For the Deacon I was very lucky getting to choose an Arcane Power, and I chose Banishment. For my Knight Marshall I was equally very unlucky, raising the one Attribute his has no use for – Marksmanship. 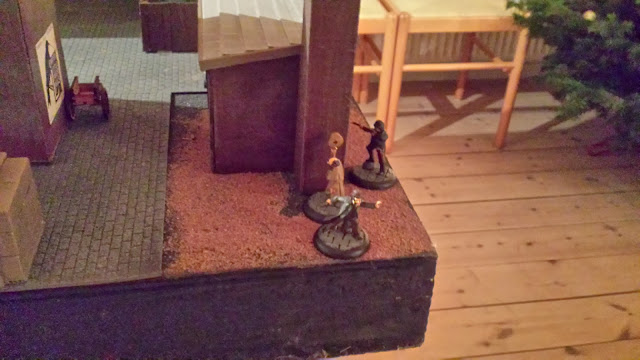 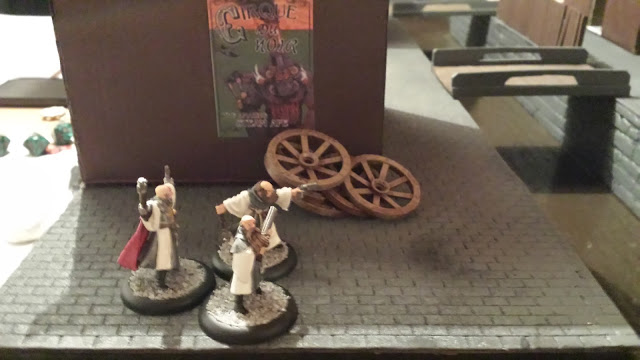 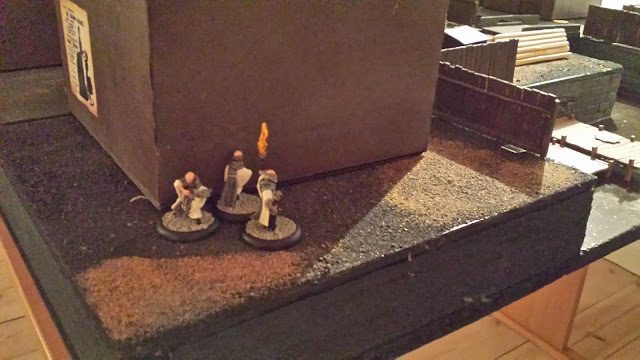 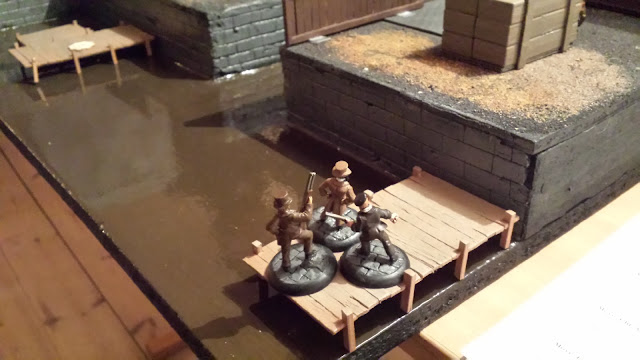 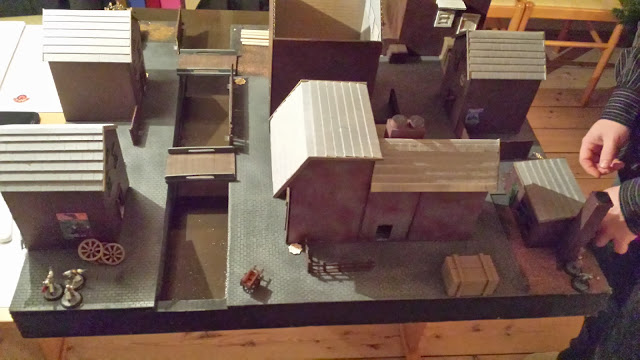 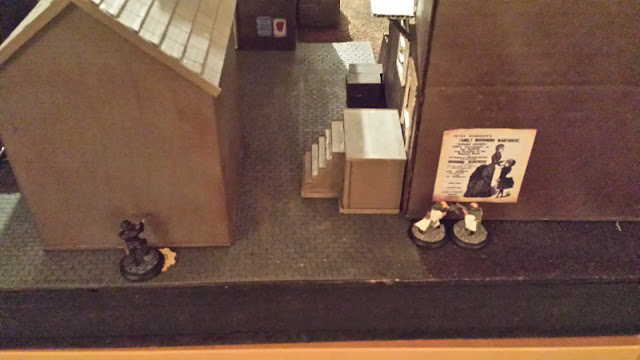 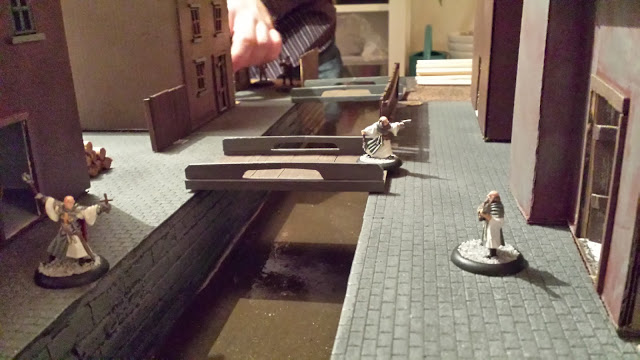 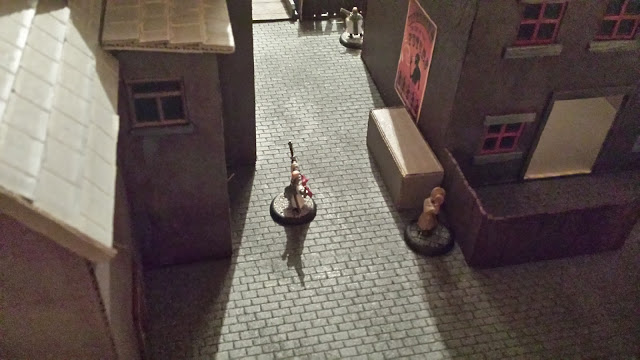 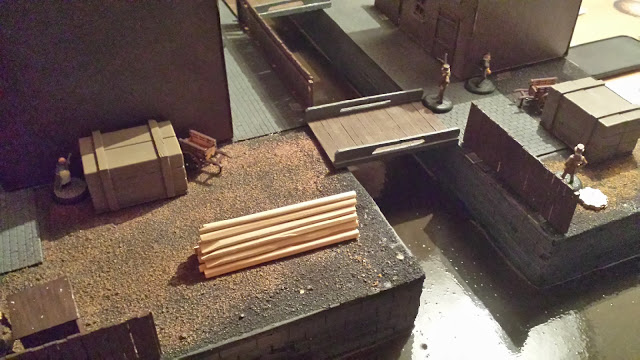 Blissful Ignorance
I asked Jon whether he wanted to try the Blissful Ignorance scenario as he had not tried it before. We again got Corner Deployment, Jon chose Day and we ended up with 6 civilians, that we would try to bring to safety. Since both our factions are good, none of us would be able to shoot at each another once we controlled a civilian, which would add another tactical dimension to the scenario.

In the first round we managed to get closer to the civilians, and I even managed to take control of one. In the following rounds we got to 3 more civilians and since we had to resort to Melee combat we ended up with a lot of charging.

My Knight Marshall who controlled one civilian managed to hold out despite being charged by two members. My Deacon got to two of my civilians, but Jon managed to remove two of my brothers from play before they could get to a civilian.

As the next rounds rolled on, my Deacon released one of his civilians, so that he would be able to use his Arcane Power. Banishment proved to be very good, as I in two subsequent rounds managed to banish but Jon’s Vice-president and a member leaving 3 civilians in panic. Jon then managed. His President then removed a third brother from play and my Brotherhood reached its Breaking Point.

My Bravado checks went as bad as Jon, with only my Deacon successful on his Bravado check. I then conceded the game.

This was the first time that I had played this scenario where most of the civilians were not in a factions control at the end of the game. Jon scored a lot more shillings than me because he had all of his Sons bar one left standing and had removed three of my brothers from play.

On the campaign tables one of my brothers got a Leg injury but the rest were fine. Jon chose to visit a Harley Street specialist and his members got all of their old injuries healed. 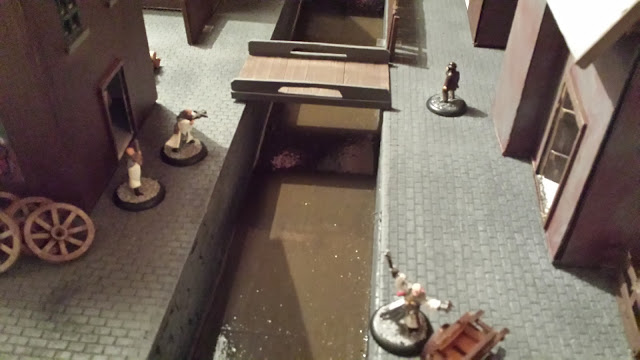 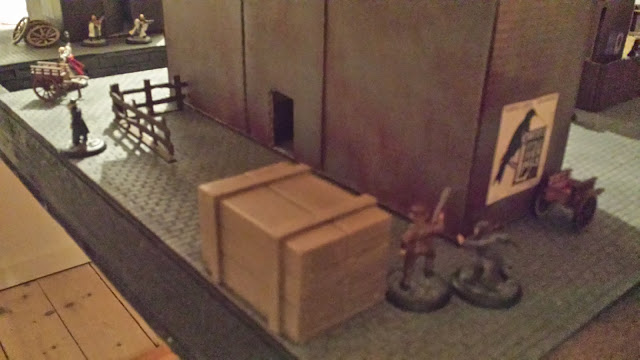 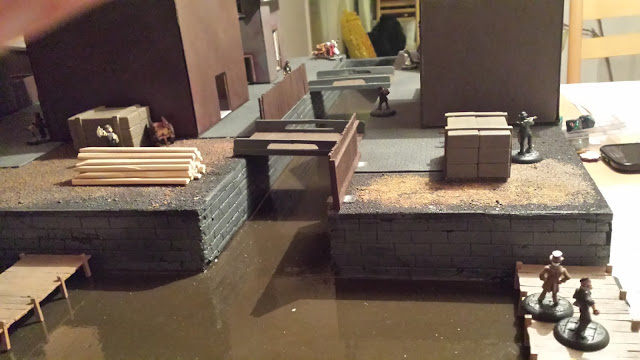 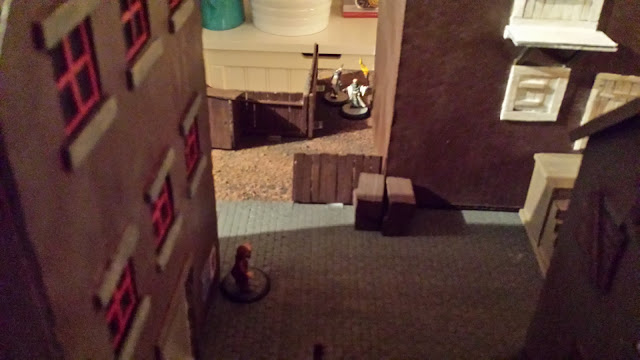 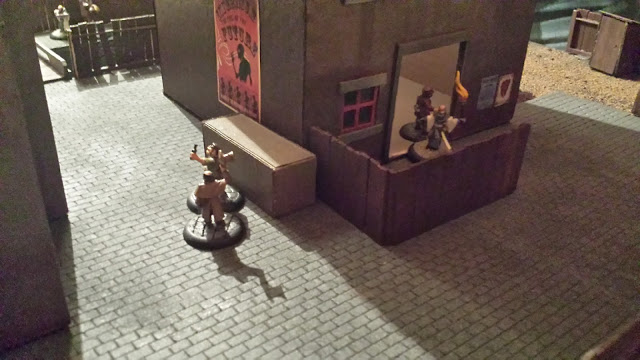 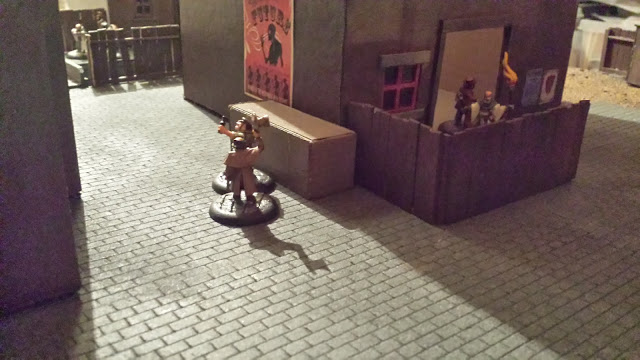 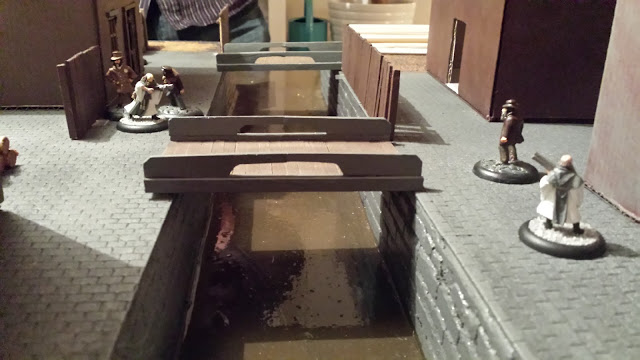 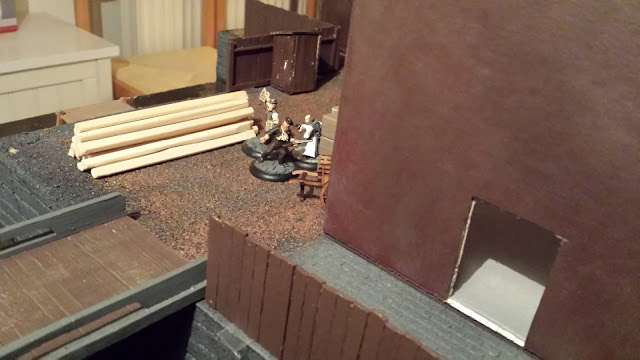 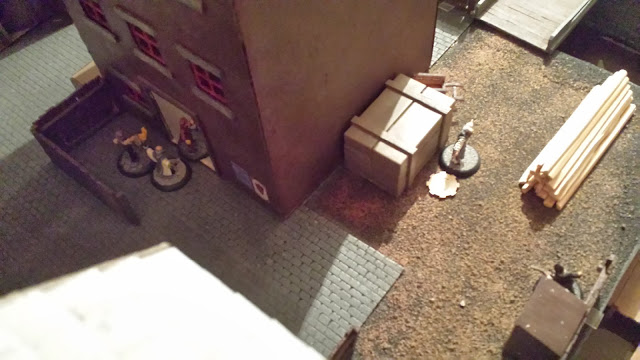 
I love the look of the Brotherhood on the table. I had chosen their equipment based on which minis I wanted to use, and my favourite brother is equipped with a Volley gun, so I tried that out for the first time. Despite only managing to remove a Wound from Jon’s President in the first game, there is no doubt that the weapon can be a game-changer. The Banishment arcane power is also very useful, might even be the single most powerful thing that I have played with in the game.
Posted by Kaspar Olesen at 14:59 5 comments: