Well before Christmas I purchased the Vampires starter box for Empire of the Dead. I still prefer the old starter boxes to the Requiem one, and I really wanted to add the Vampires to my collection. Since then my friend Michael had pestered me about getting them painted so that he could try them out. 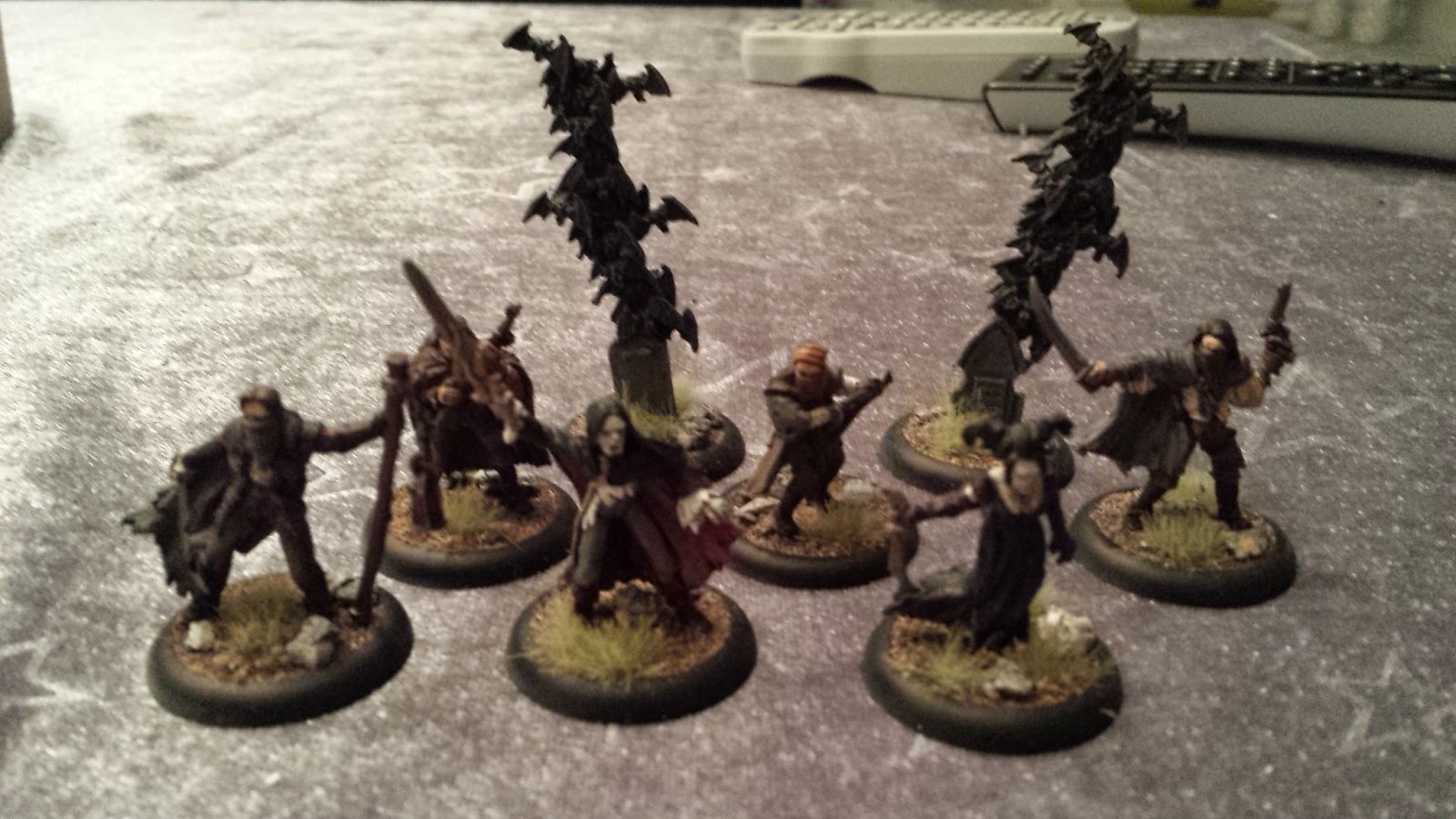 After many delays, primarily because I am still working on my 1812 - Retreat from Moscow game, I managed to get them painted over the weekend, and Michael and I setup a game yesterday.

As usual we played on my London Docks board. My daugther, having looked at all my EotD minis asked me if I would play the Lycaons as they are her favorite. Werewolves vs. Vampires... not a bad idea I thought.

Despite me trying different changes to the rules, I have ended up going back to the original ruleset, with only three changes:

- No IGOYGO, we play with one mini being activated and then the other person activates one of his minis
- In Combat we add the Cbt score and whoever scores the highest is the victor and gets to try and wound
- When you charge you cannot throw weapons while doing so

We rolled for scenario and got Blissful Ignorance, one of my favorites as I get to have more minis on the table. In the night/day selection I won and chose night, as I was more affraid of the long range guns than the combat ability of the Graf and Consort.

These are the factions we came up with:

We set up the civilians and then moved them at the beginning of the round as the scenario dictates. For the initiative I ended up winning, in fact I would win all the initiatives in the game.Most of  first round was spent moving minis closer to the civilians, but but the Vampires and the Lycaons were able to get one mini in base contact with a civilian, but otherwise only one shot was fired as a Thrall took a shot at a Wolfskin but failed to hit.

Second saw a bit more action as we got into better positions and got in base contact with another couple of civilians. The round ended with two Thralls moving back towards their deployment zones with a civilian in tow. I still only had a single civilian in my control, but thought I had lined up my minis well for the next round.

Third round and another initiative win for me. I started by having my Wolf charge a Thrall, Michael moved his Graf into base contact with two civilians and dragged them back a few inches. My Beastlord had gotten into a good position and was able to charge the Consort. One of my Wolfskins managed to one shot kill a Thrall with his bow. When the Combat phase came up, we had two combats and some serious lucky/good rolling from me saw the Beastlord slash the Consort and my Wolf make short process of the Thrall.

When the fourth round began, Michael had to take a Bravado test, as I had reduced his faction to 50% - one of his Thralls had managed to get out over the table edge with a civilian, so he only had to roll for his Graf and one Thrall. The Graf easily managed his Bravado check, but the Thrall failed, leaving Michael with only his Graf on the table. Since there was no way I would be able to reach his Graf and the two civilians he controlled, we decided to end the game there rather than play out the predictable end to the game.

While it was a short game - about an hour, it was very enjoyable. During 2014 I played a lot of Malifaux, but have taken an extended break for that game because IMO it lacks atmosphere and has spread it focus to widely. Empire of the Dead is the game for me in terms of setting and atmosphere, and I will see if I can't get a small campaign tournament setup with three of my friends.

Some images from our game. 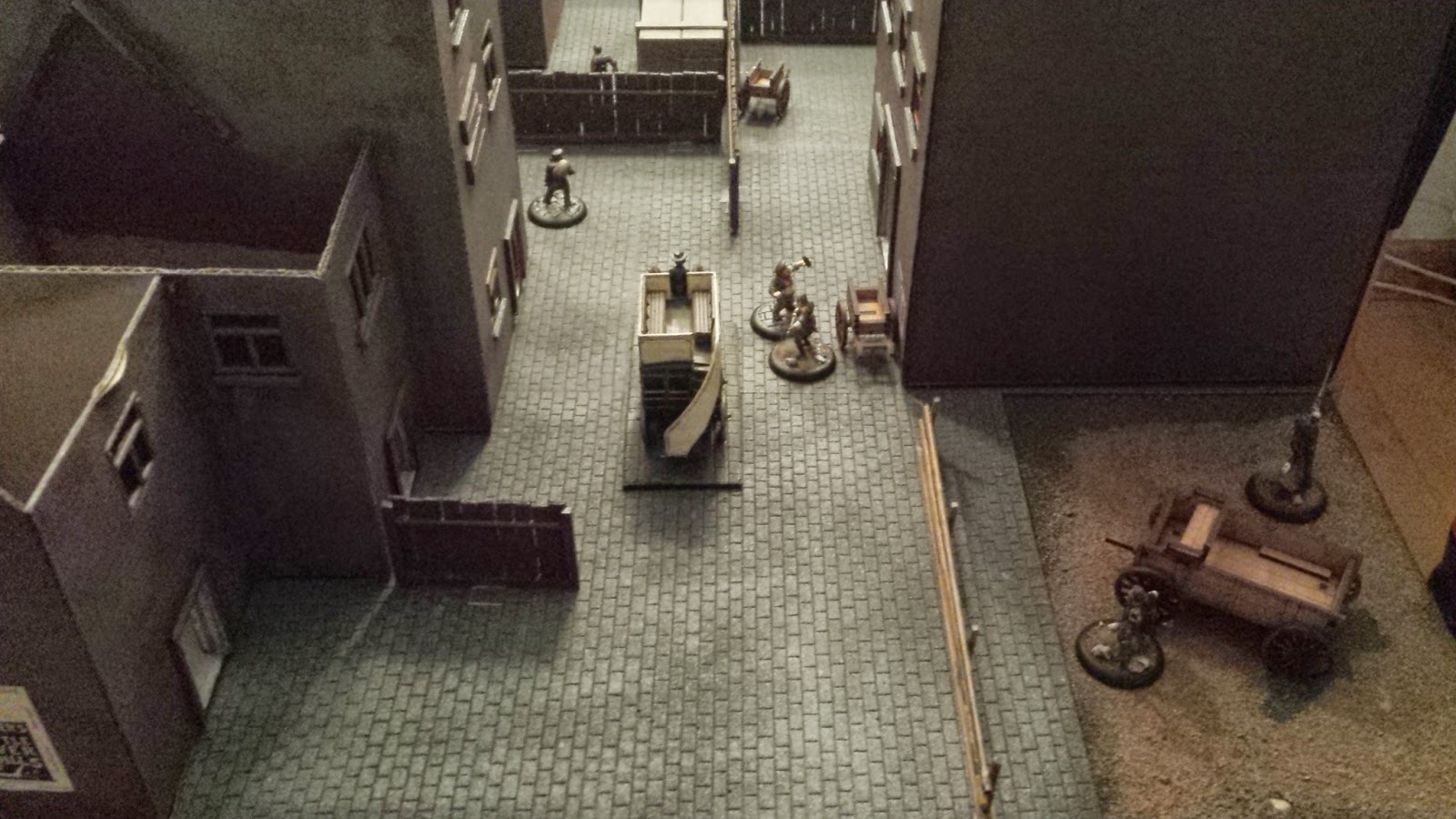 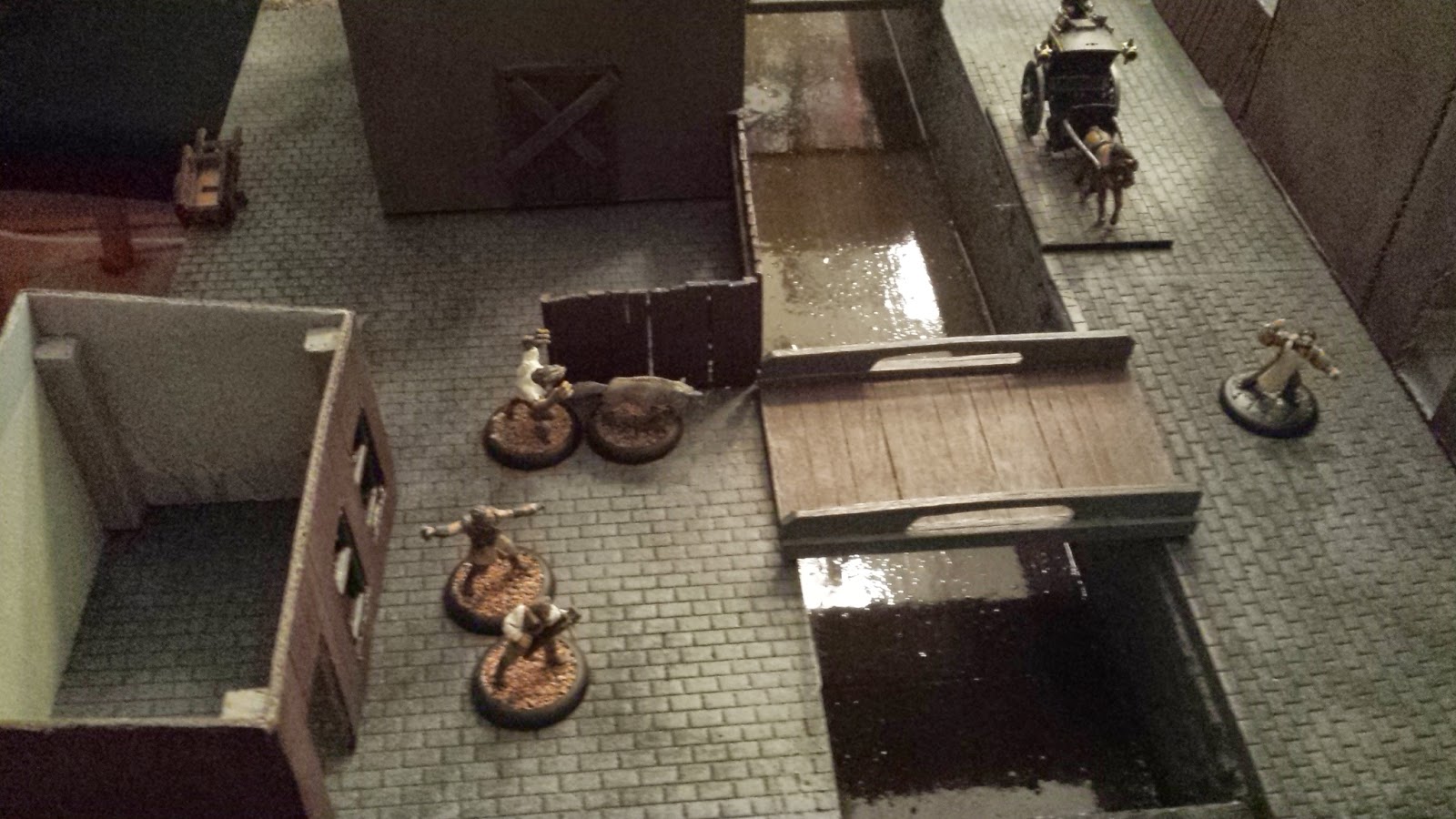 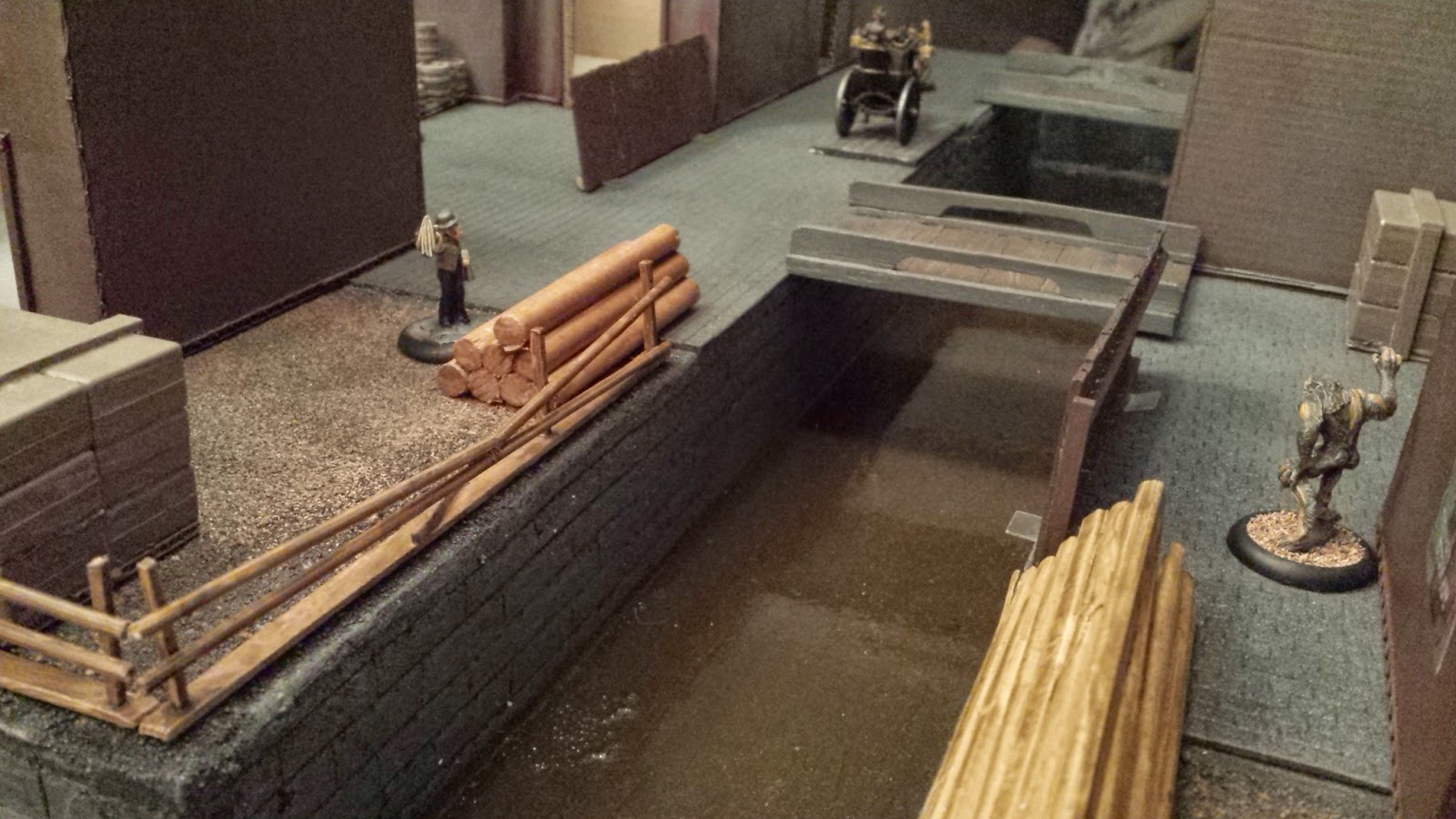 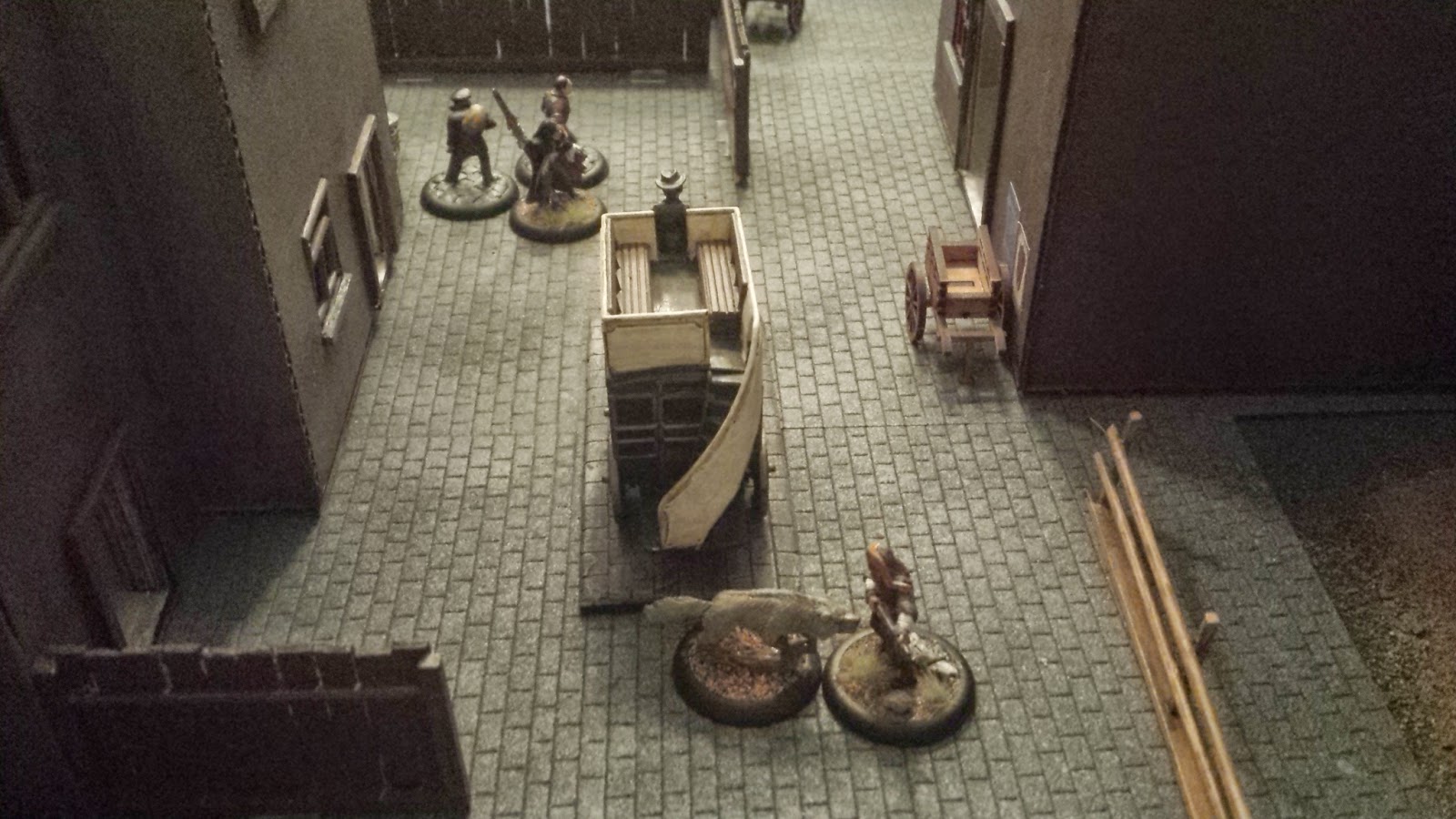 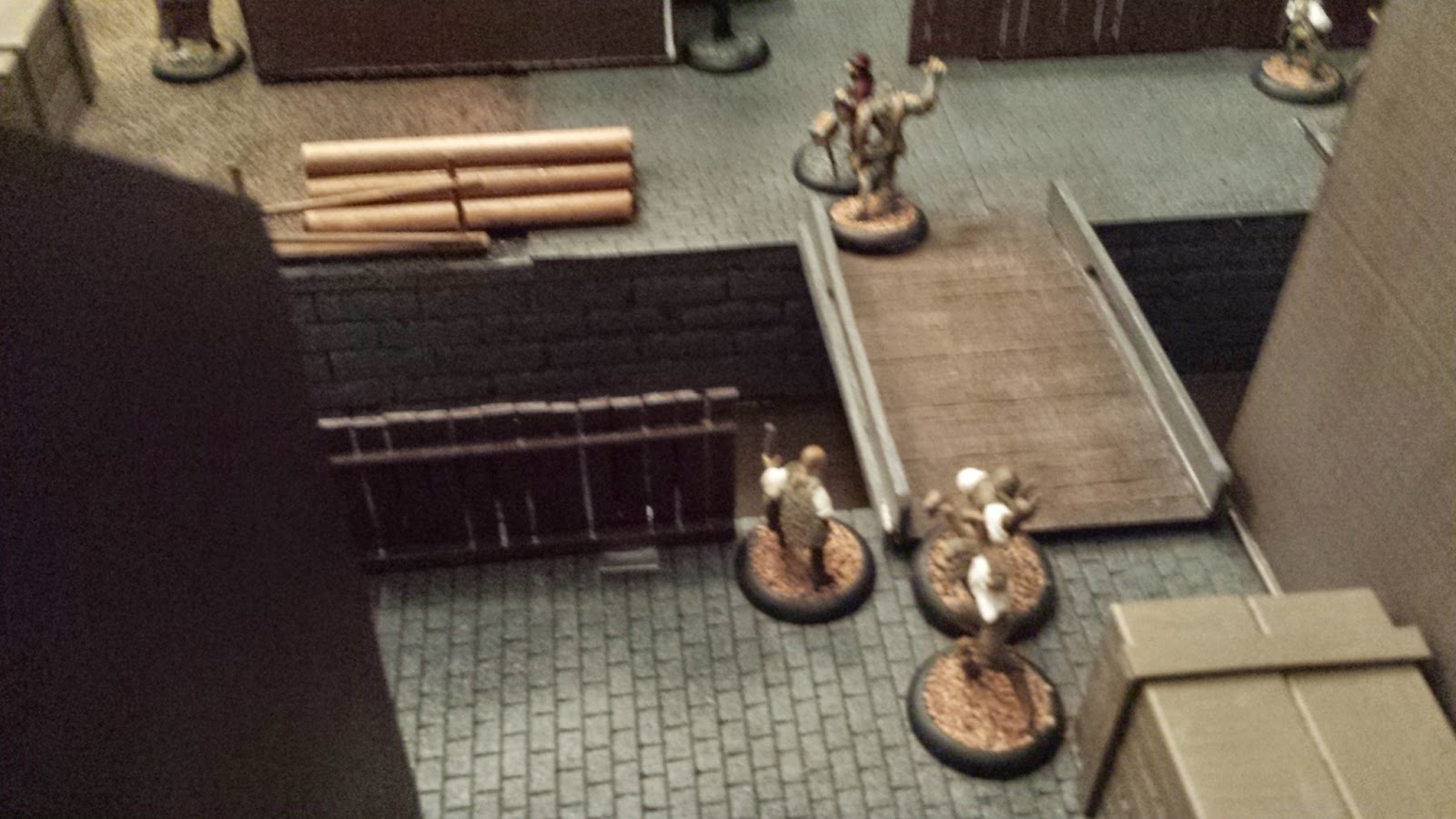 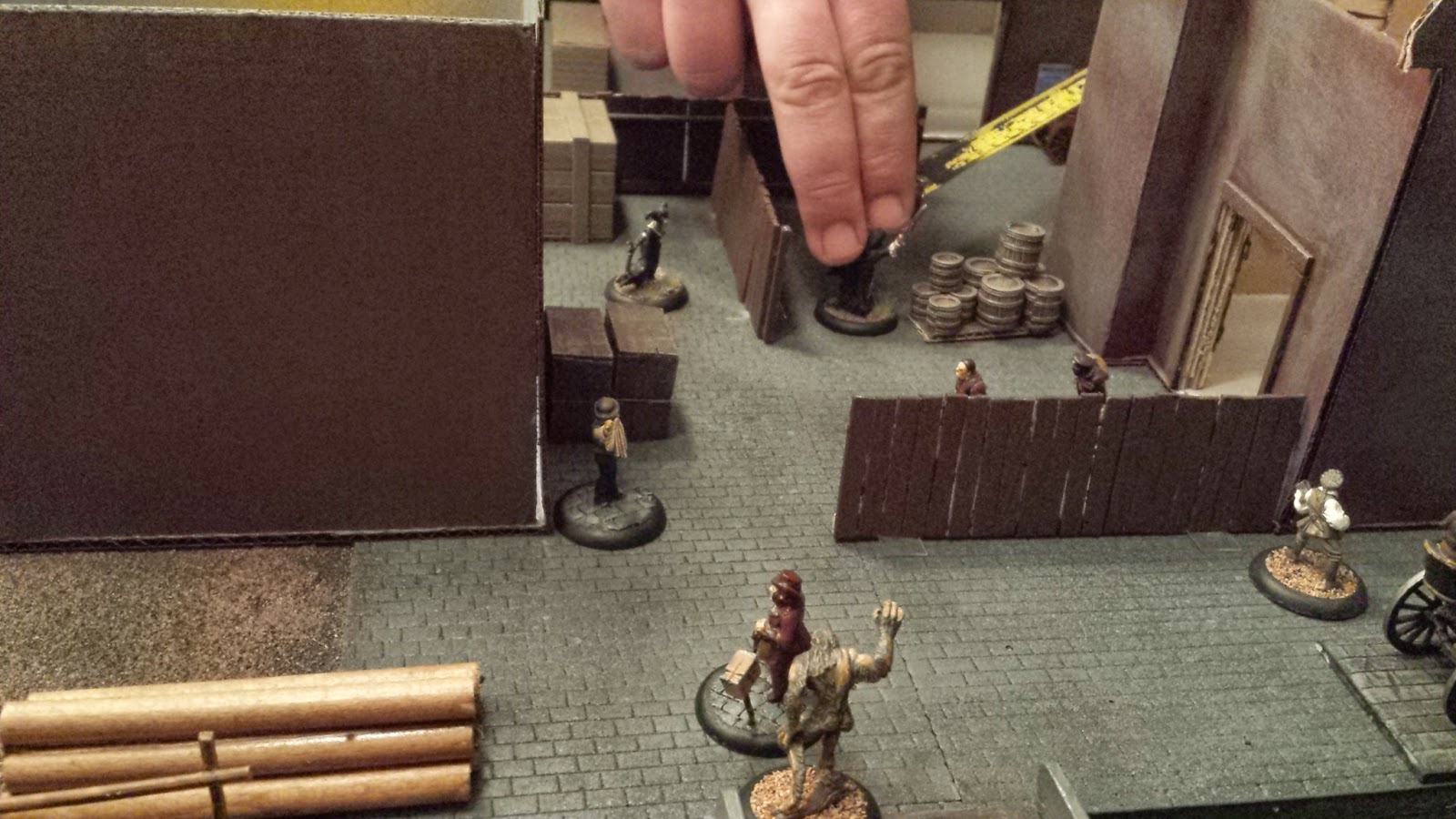 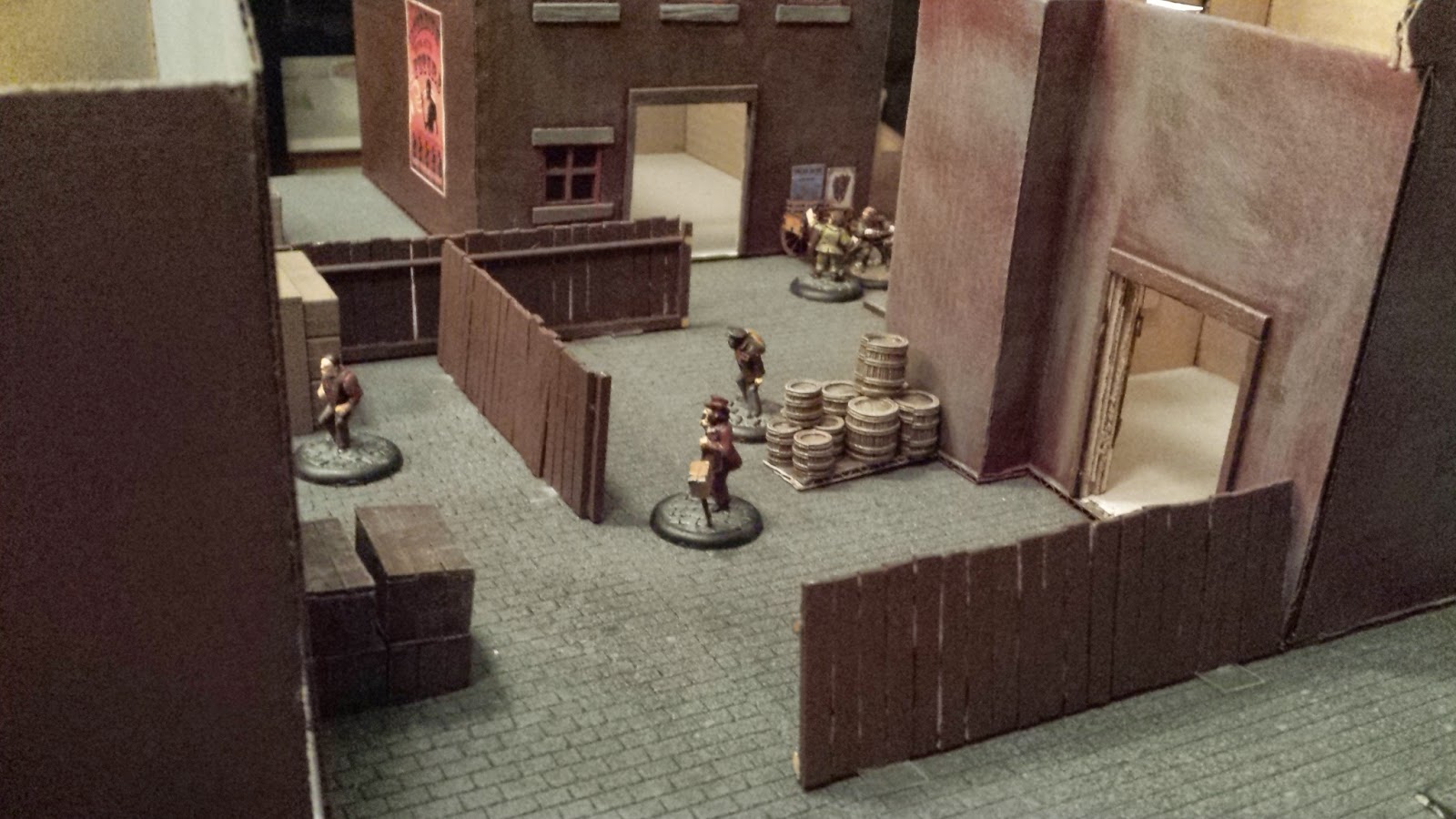 Amazingly this is the first non-fiction Jack the Ripper I have ever bought, despite an interst in the Whitechapel Murders that go back almost 20 years. Over the years I have watched and sometimes cringed (Patricia Cornwell, Trevor Marriott takes top billing for the worst documentaries) almost all the Jack the Ripper documentaries that have been made. On YouTube they are almost all available, but the best and most recommendable is:

This documentary is made by the same authors as Jack the Ripper: CSI: Whitechapel Paul Begg and John Bennett, both are highly respected Ripperologists (the term used for Crime Historians specialising in the Whitechapel Murders). Paul Begg has had numerous books on Jack the Ripper published over the last 30 years, while John Bennett has specialised more in the world of Jack the Ripper - namely Whitechapel and Spitalfields in the late Victorian Era. Their talents combined has created an extremely good book, where there is no focus on twisting and turning facts to fit a certain subject. Instead the book only lists facts and witness statements, while also providing background information on several different aspects of the case.

The book is filled with many good pictures, some are CGI constructed of how the streets looked at the time and they are excellent, giving a superb insight into how dark the streets were.

I highly recommend this book and while I consider myself well versed in the Whitechapel Murders the book was still a page turner for me. Forget about the identity of Jack the Ripper having recently been discovered by DNA, it is nothing more than a stunt to sell books, there was no evidence that could prove the idenity.

If you are interested in finding out more about the Whitechapel Murders, I cannot recommend enough the vast casebook.org website. This is the place where serious researchers share their information and where you can find information about everything.
Posted by Kaspar Olesen at 14:09 No comments:

Been working on a lot of terrain for my gaming table and my next few posts will be about the different pieces. First up are some Russian huts.

Before Christmas I saw some excellent huts on a blog (can't remember which one) as I was looking for ideas for Russian huts. I found out that they were from Pegasus and I immediately placed an order with Arcane Scenery, about a week later they arrived in the mail. 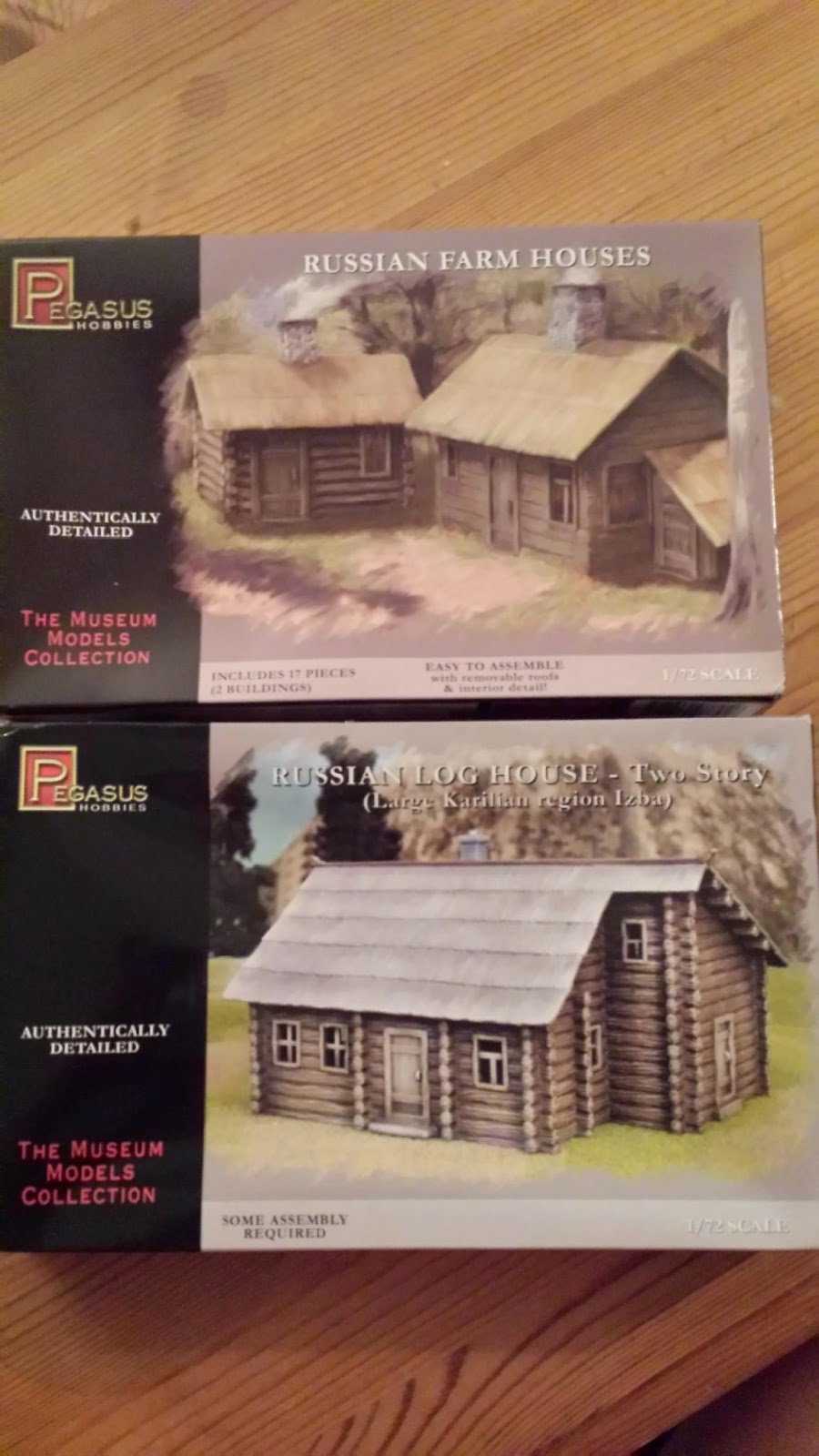 They are scaled for 1/72 but I think they will do for 28mm. The plastic kits were very easy to assemble. I did not get around to painting them until last week.

With the setting I needed to put some snow onto the roofs and I used my usual mix. I did not get a consistent look on the different roofs so I needed to go back and apply another layer. 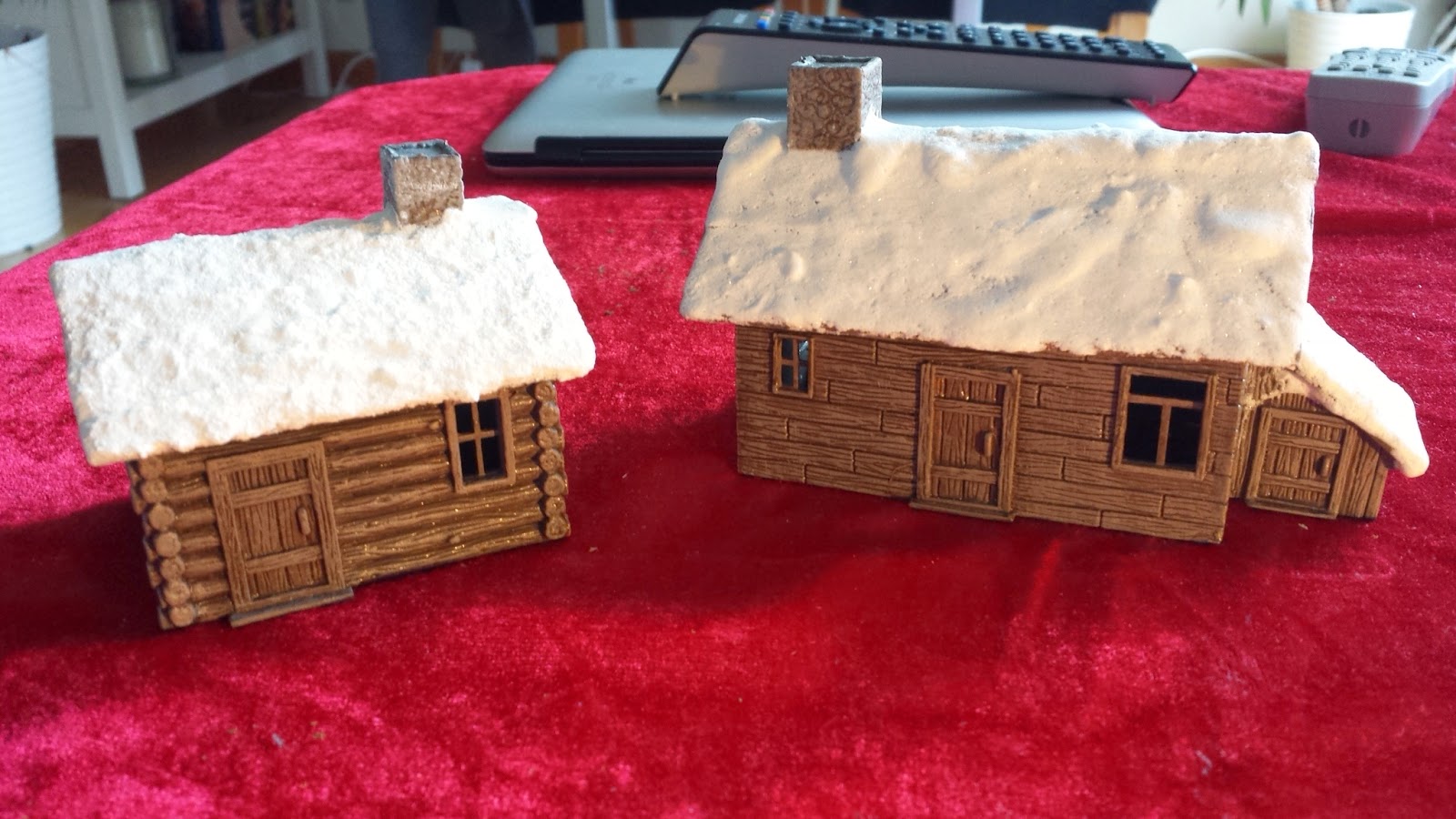 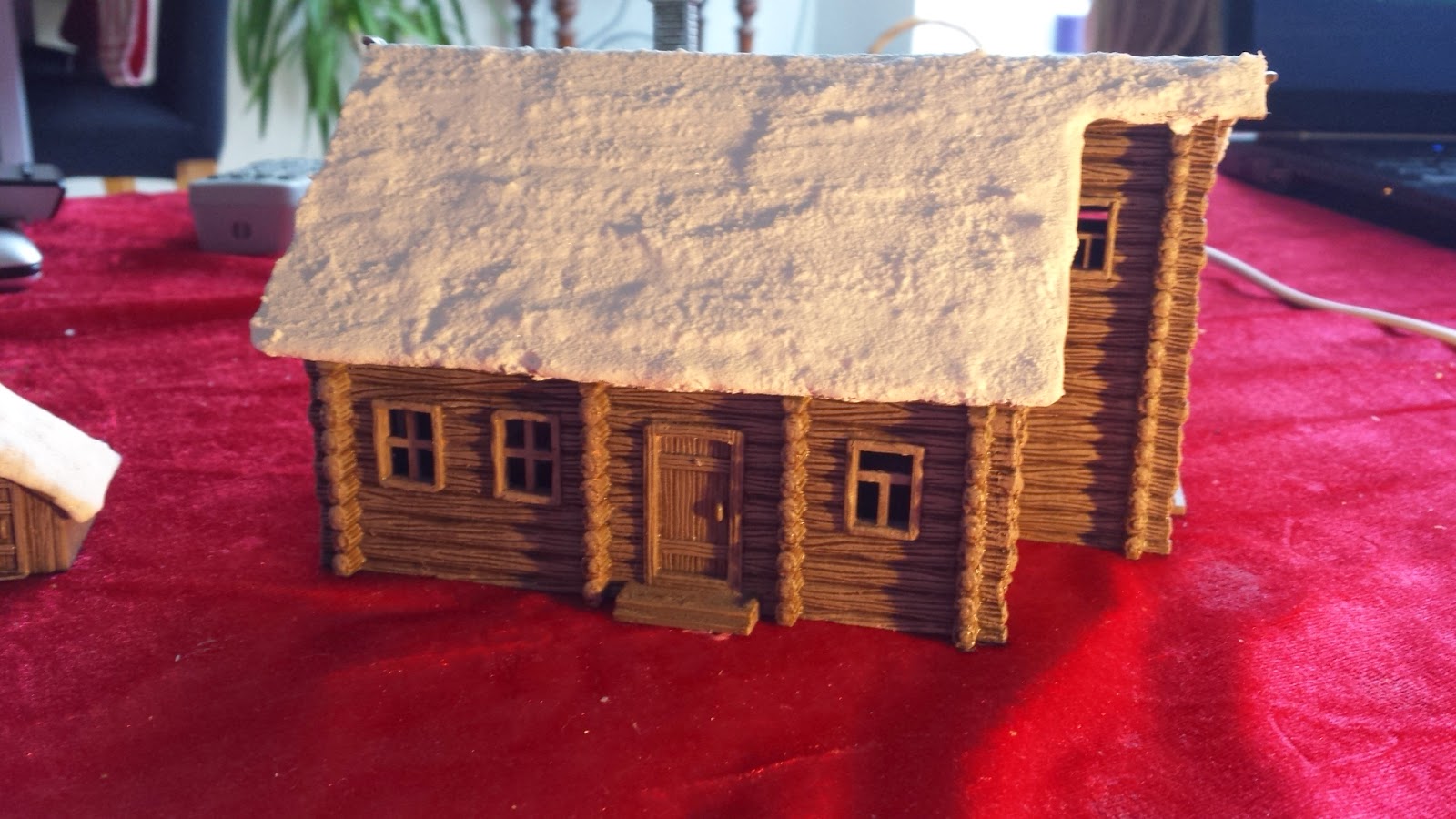 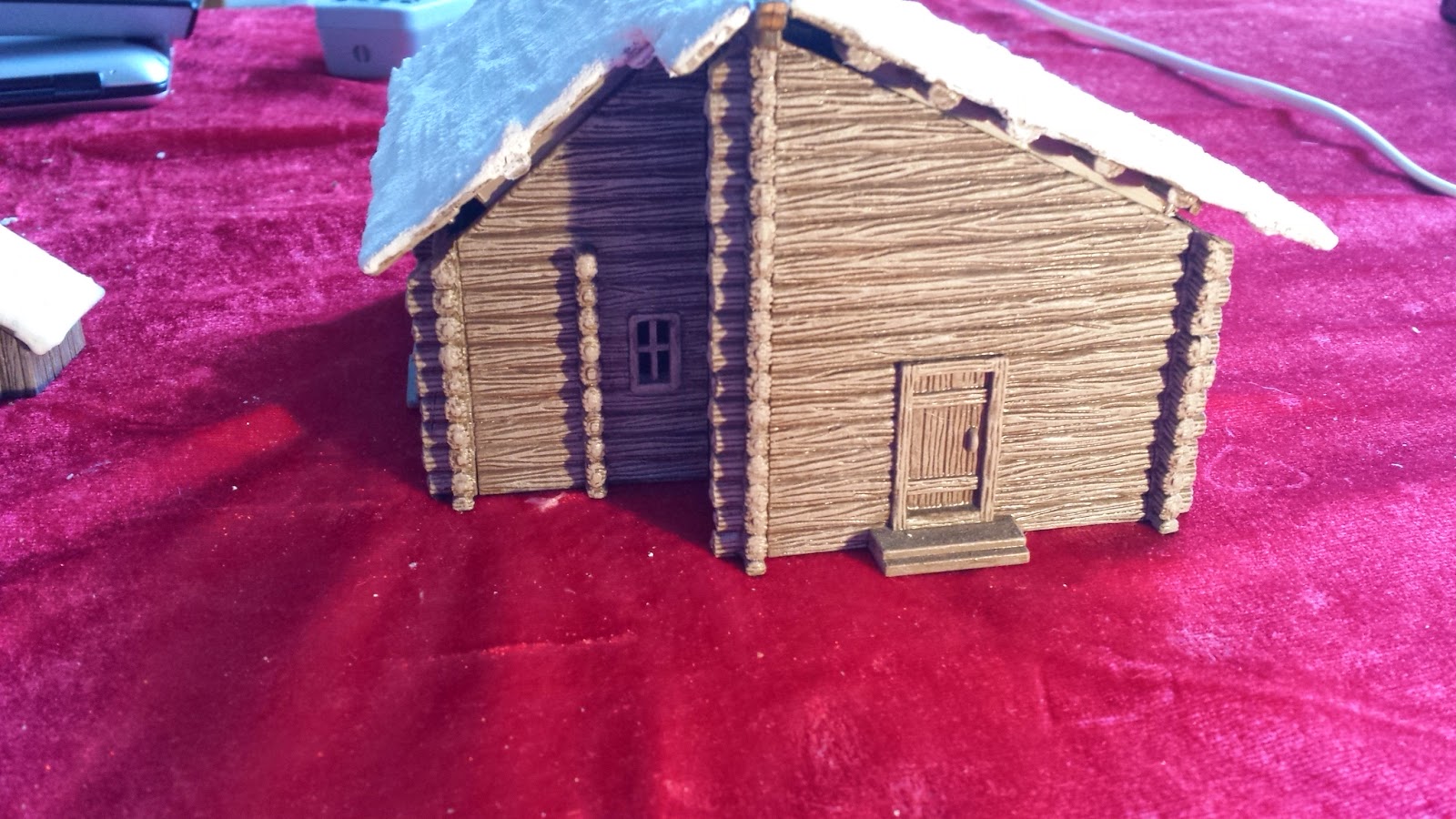 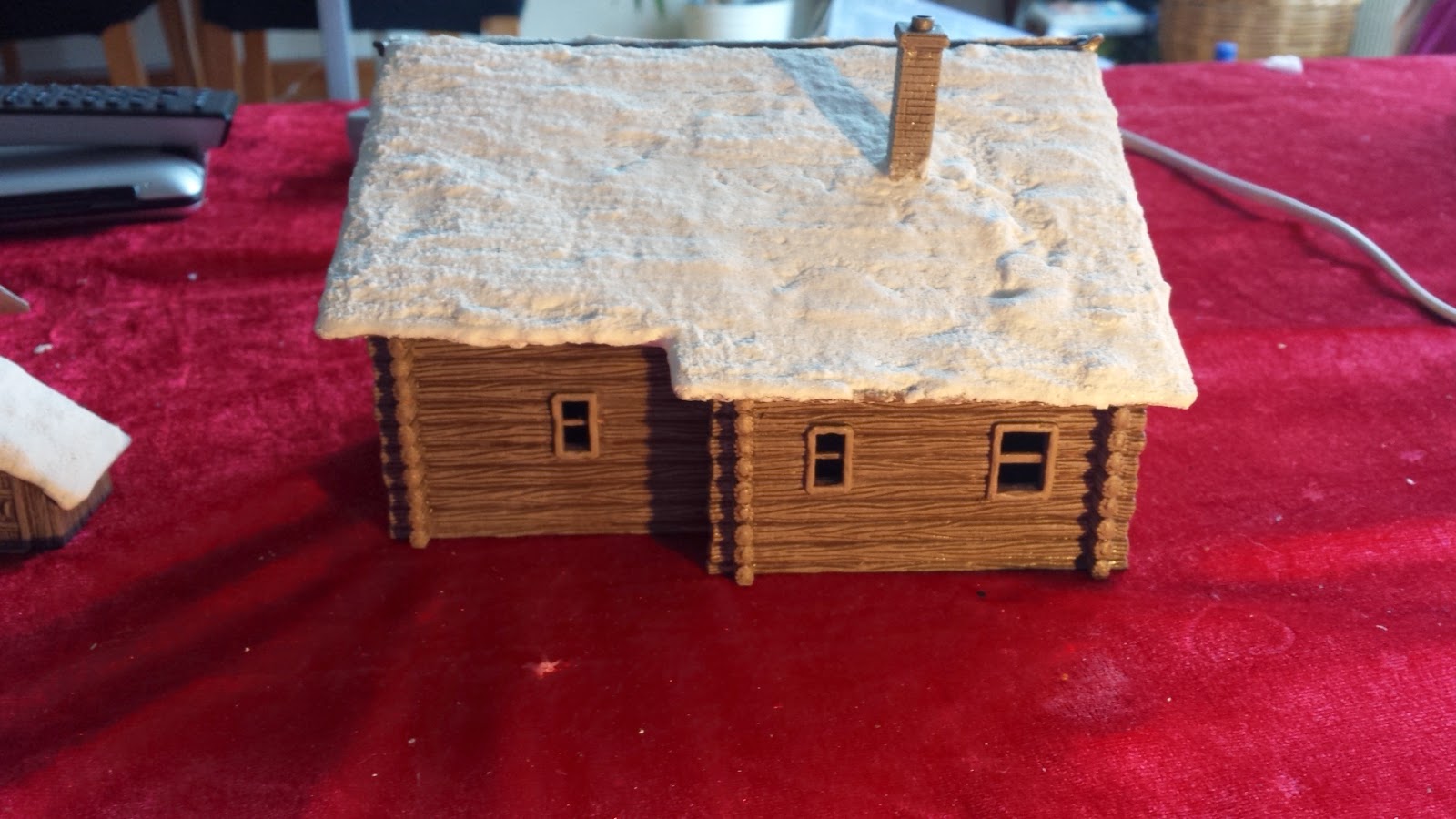 I am also thinking about creating some burned down huts, but these will be my intact huts.

The Activation Deck runs the game sequence. There are four types of cards:
Activation Cards
An Activation card contains three pieces of information: the side being activated, the Troop Type activated and the number of Actions allowed for these units.

When drawn, all Troop Types of the activated side (including Officers that are a unit consisting of a single model) may perform the number of actions indicated on the card.

Example: if the player who will control the Russian Army, adds a Russian Jaegers unit (Troop type: Irregular) to his army, he adds the Russian card for Irregular units. Once the game begins, when that particular card comes up, the player then activates all his units with the Irregular troop type characteristic. Morale Card
There is one card for each side. Once the card comes up that side will have to take a Reaction test for each unit. This card is only added when at the end of a turn one side has lost half or more of its starting number of models.

Forward Boys!
This card activates all Officers and units with the "Elite" trait of that side. Each of these units may immediately perform 1 action. For my cards I wanted to have the text Forward Boys in the two languages of my game. 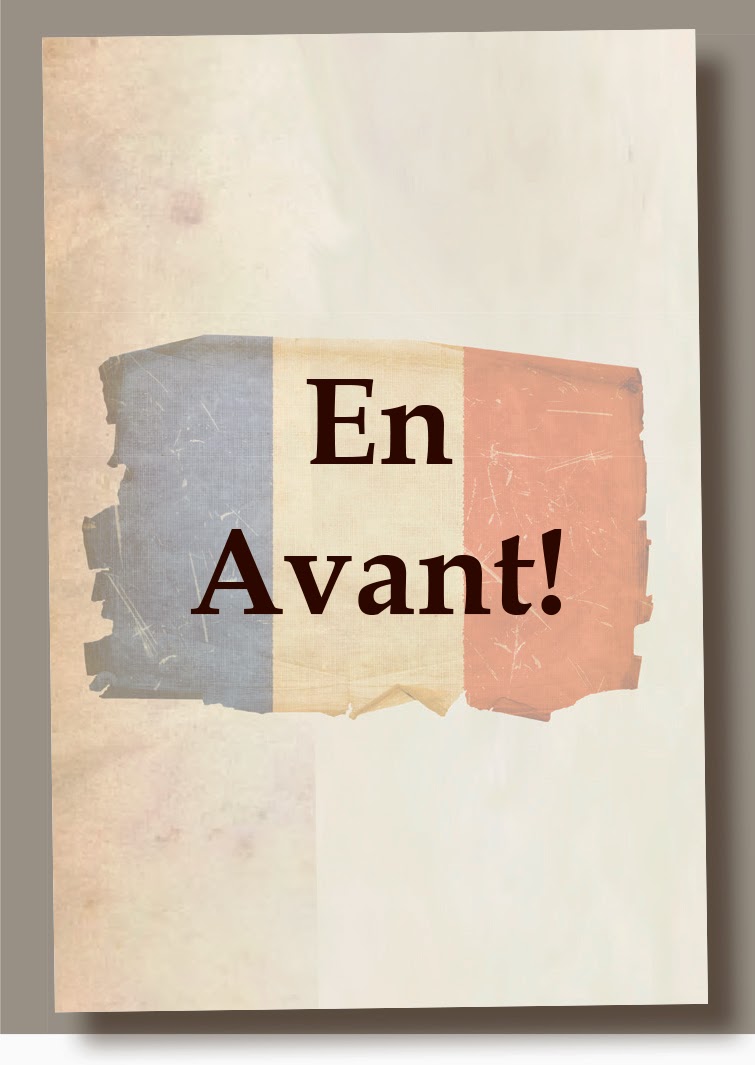 The  event cards are  used to add a  random element to your game. They can be used to indicate a specific scenario event if  using the Scenario Generator. Some times these cards will not have any impact on the game, at other times they may have unexpected consequences.

For the back of the cards I chose the well known image of Napoleon during the Retreat from Moscow by Adolph Northen. 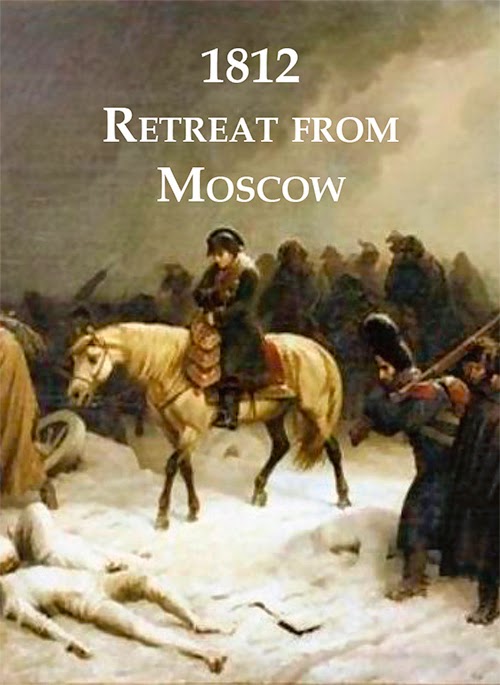 Through my work I have access to an online image database and here I found some excellent images of battle worn French and Russian flags. These would be the background for each of the cards front. It was then just a question of adding the different text to each card.

I am very pleased with the results, especially the look of the two flags.
Posted by Kaspar Olesen at 13:35 1 comment:

These figures were painted and photographed before Christmas, but I have only now gotten around to actually posting these. The photos are not the best, so I will try and take some new ones.

The mounted Cossacks are all from Perry Miniatures. The bases are made from hard wood, with a simple snow mixture (baking soda, white glue, white paint and water). They are wonderful looking figures with lots of character.

The Cossack infantry are from Westwind Miniatures. The are listed as Dracula's Cossack Guards and are part of their older Vampire Wars line. They are a bit more fantasy like than the Perry Cossacks but not much.

My painting of these are very simple, base colour, the a Sepia Wash, and a few highlights. It will not win any prices, but it gives them the rough and dirty look of a soldier that I like. 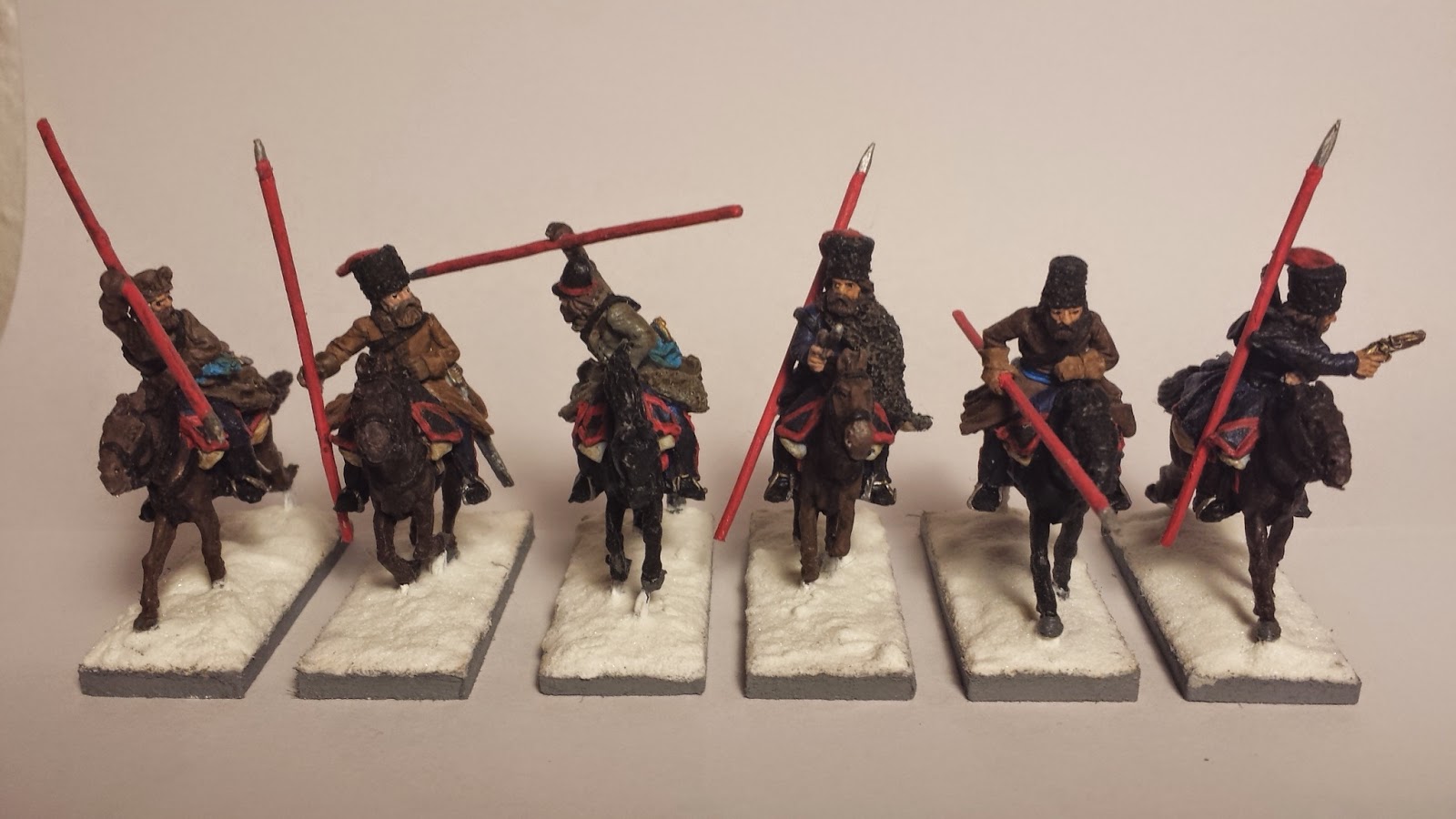 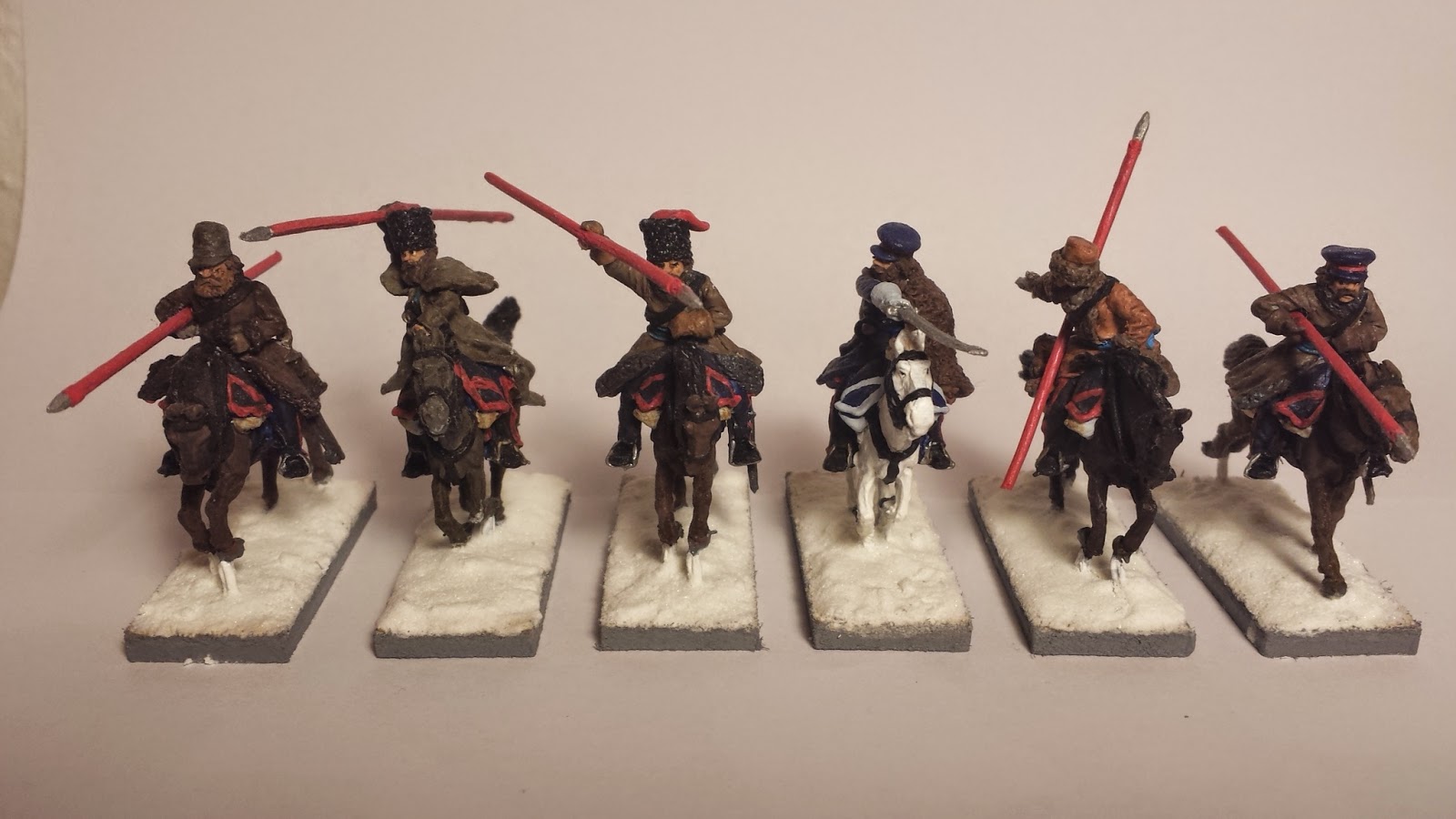 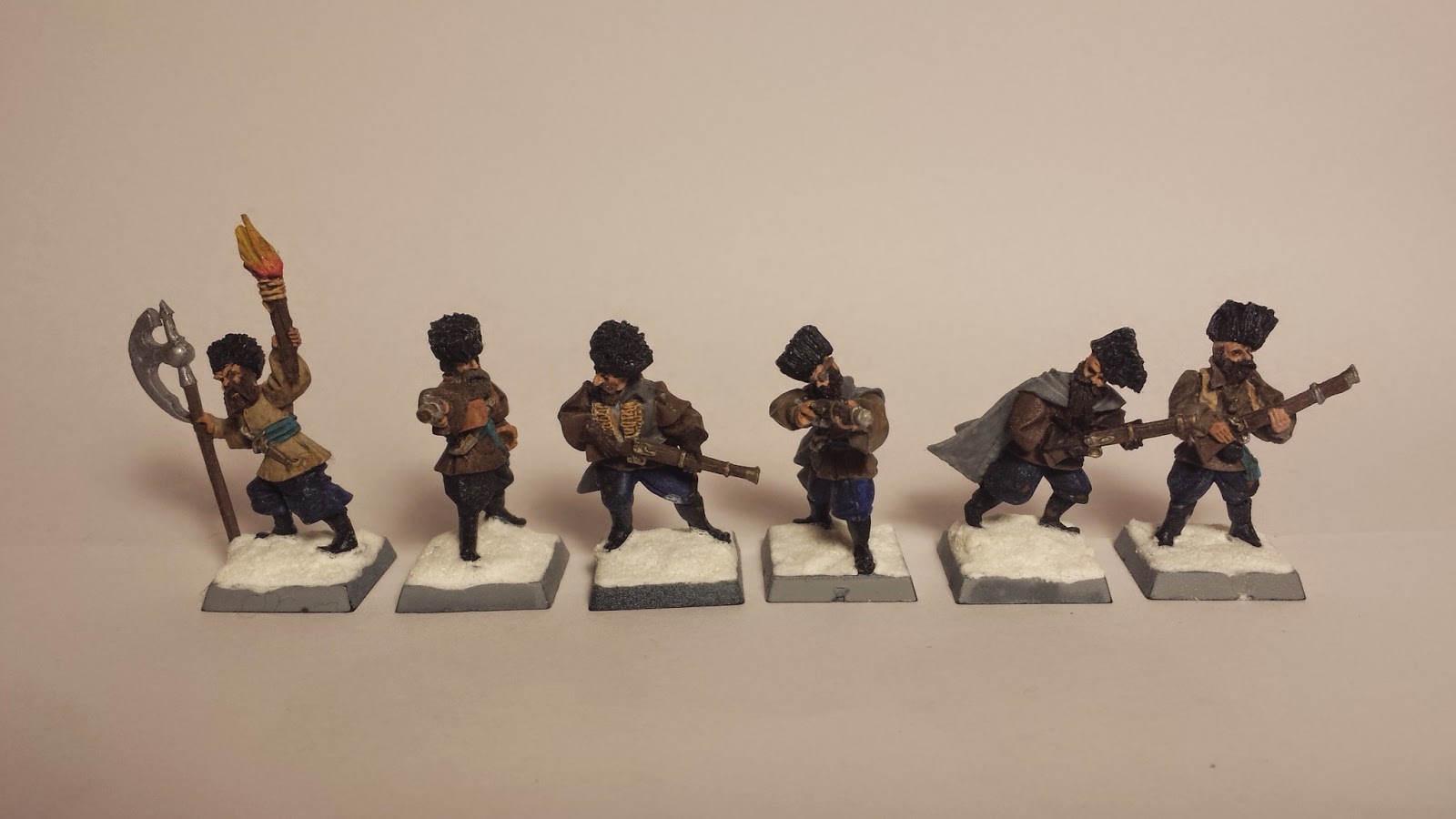 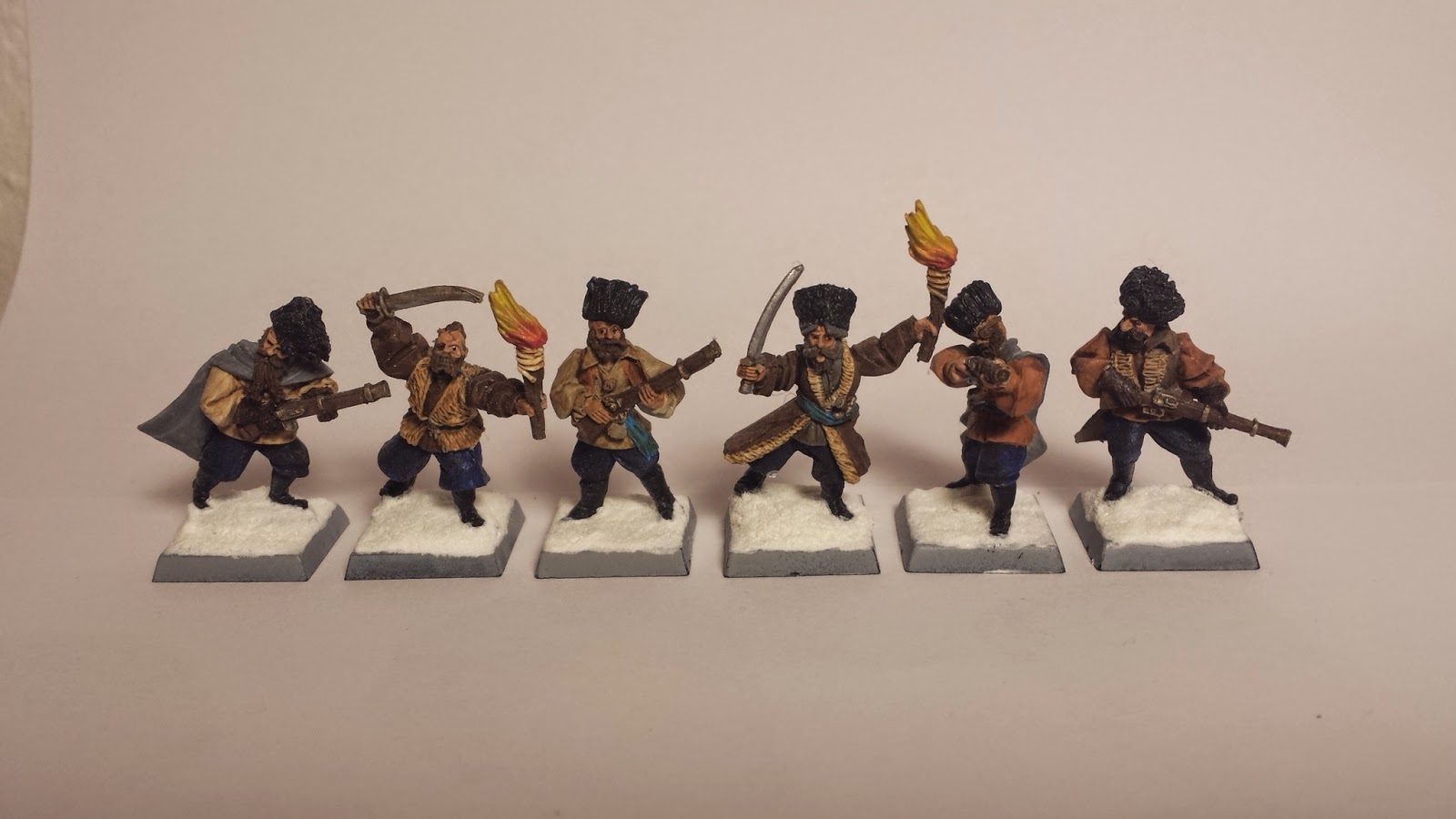