These are the Warlord Games Germanic Tribemens that I had painted up and used for my playtesting of Mark Latham's upcoming game Broken Legions.

This box set contains numerous minis and with the exception of the mastiffs, the wolfmen and some bow man arms, everything else is from the box set.

I had enough options in the set to make the miniatures as the different types of Heroes and Henchmen available to the Germans.

Anyway on the pictures. 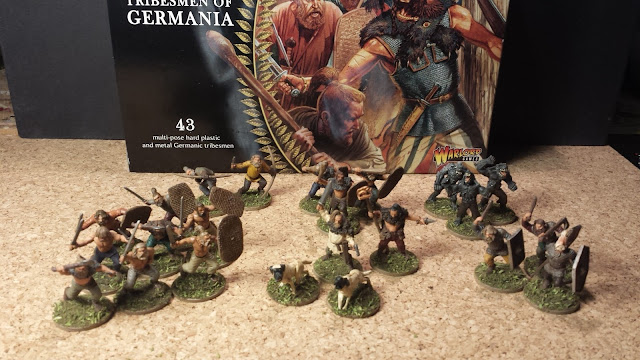 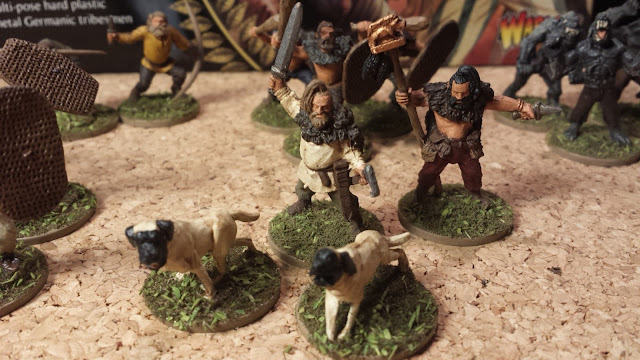 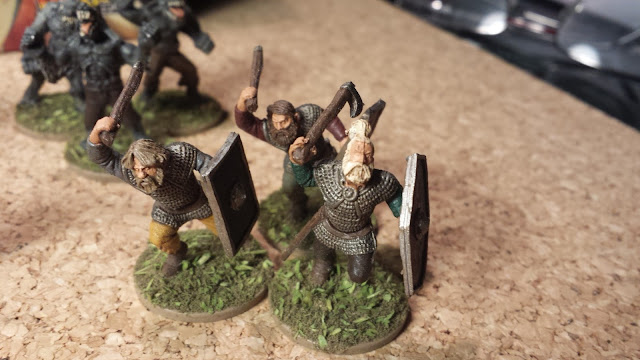 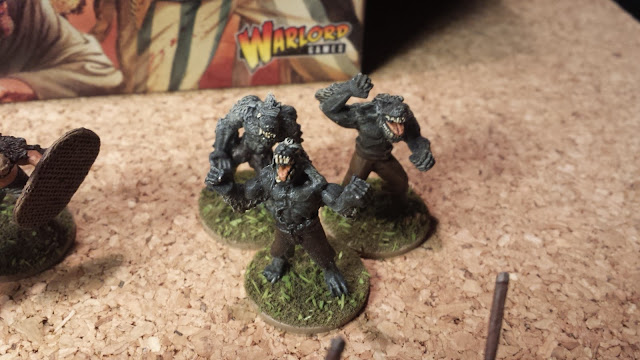 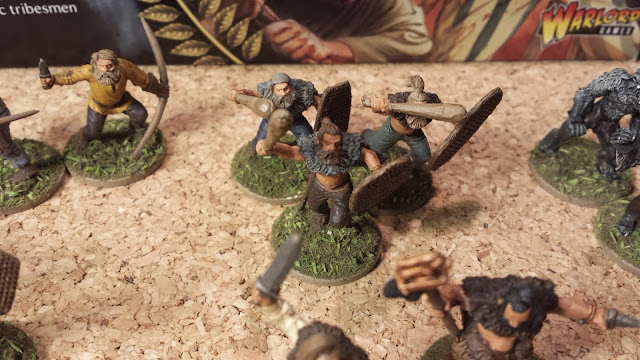 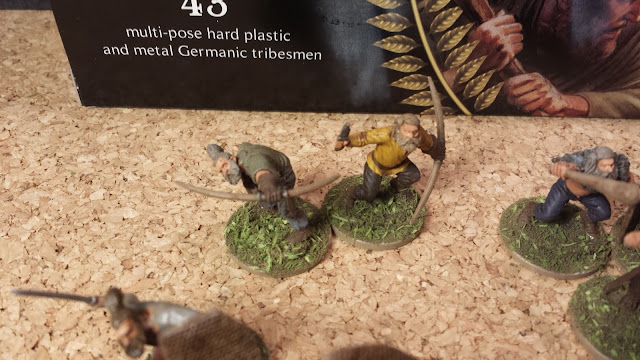 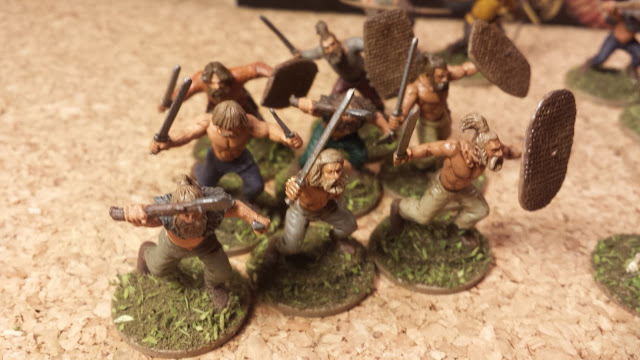 Since the start of November I have had the pleasure of play testing Osprey's upcoming Roman era fantasy skirmish rules Broken Legions by Mark Latham. 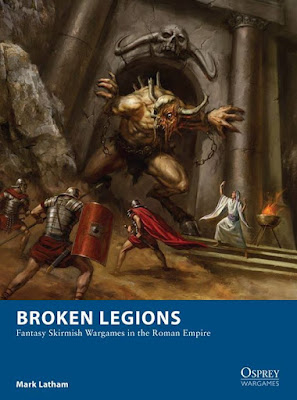 In the rules I have tested there are a number of sample warbands - three different Roman types, Germanic Tribes, Egyptians, ect.

Each warband is comprised of Heroes and Henchmen - like LOTR. There are a minimum requirement for each warband - one Roman warband must include a Centurion as its leader and have at least 1 legionair. The warband lists then have different types of heroes and henchmen, again the Romans have the option of adding more legionairs, praetorians, archers ect. The non-Roman warbands almost all have access to some kind of supernatural creature - Germanic Tribes have wulfkin (werewolves), the Egyptians have mummies. There are a number of Auxiliary (mercenaries) that warbands can hire to add even more flavour to your warband, these include Sicari assassins, Centaur scout, Necromancer etc.

The game is true skirmish, so you will have roughly 8-15 figures per warband. In our test games, the Romans had 9 and the Germanic Tribes 14.  Each warband has different strengths and will work best when used that way I think, Basically Romans have the best armour and can use a shieldwall, which they need in order to combat the more numerous Germans who in return are a lot easier to hit.

The mechanics are simple, you roll a d10 and add a stat, aiming to either reach 10 for simple tests or in contested tests against an opponent you compare your results.

I really like the game and have been expanding my warbands - once I am finished with them I will post some pictures on here.
Posted by Kaspar Olesen at 10:36 3 comments:

Some weeks ago I ordered a set of Imperial Roman Veterans from Warlord Games. The value is just to great to miss out on - £16 for 20 miniatures.

The reasons I bought them were several. Firstly a couple of friends and I have started a Weird Wars Rome RPG campaign and I really wanted some minis to represent the contubernium that the players are a part of. Secondly, as readers of this blog will know, I have been looking at adapting Frostgrave to an ancients setting, which I have named Romano Mortuum. The idea from this came when Osprey broke the news about what games would be released in 2016 and here Broken Legions by Mark Latham more than piqued my interest.

Since then mr. Latham sent out a request from beta playtesters and I immediately contacted him. I was very glad to find out that I (and my gaming group) were among those chosen to playtest the rules. So this presented another use for these minatures.

The miniatures consist of 17 legionaries, a centurion, a standard bearer and a cornicen. I knew that I would never get to use the cornicen, so I decided to give him a gladius instead. The idea is to use him as a frumentarii (spy/tax-collector).

The whole set is easy to assemble and paint, so they are highly recommended. 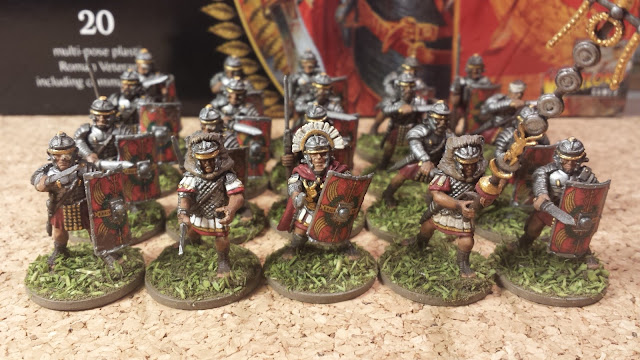 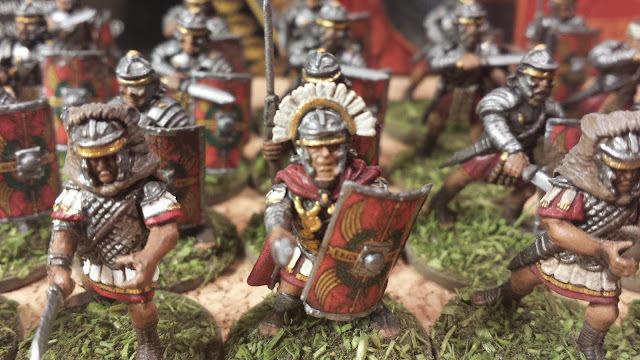 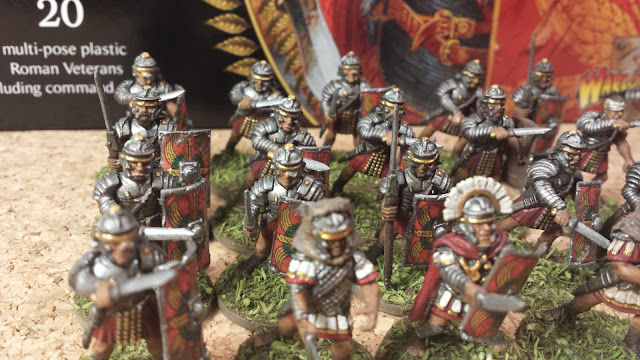 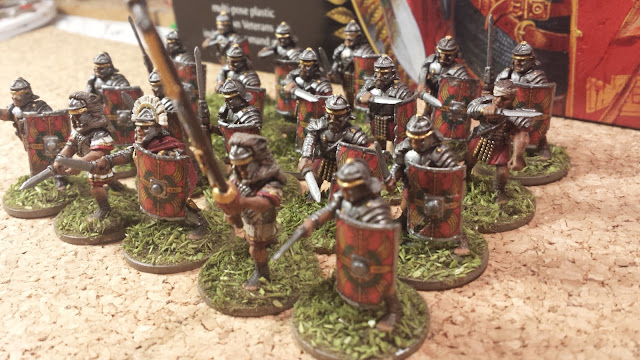 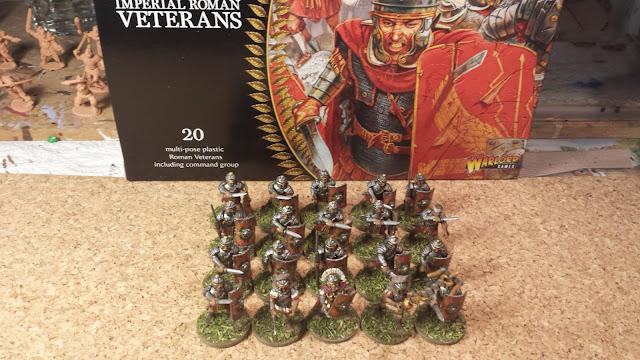