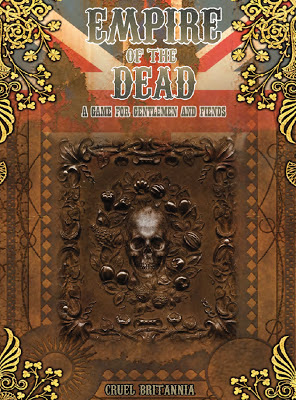 Since the new year I have been looking at making my own scenarios for Empire of the Dead. Scenarios that differ from those in the rulebook and if possible bring more extras onto the board.

So far I have created four different ones. Some inspired heavily from scenarios that I have found in other games and one which is entirely my own creation.

We have played all scenarios but som might need somw tweaking in order to work better.

The four scenarios are:

Originally I made this game with the intention of it being specifically Jack the Ripper that the factions are try to locate, but it can easily be any kind of monster. I was inspired by Pulp Alley scenario Trail of Clues and they way it uses plot points.

Based on a scenario from Frostgrave that I cannot remember the name of.

In this scenario the factions have to investigate an area (the board) because of rumours that a horrific crime has taken place. Scattered around the board are a number of corpse markers (could be victims minis). Once in base contact with one of these markers the player rolls a die, the result can be one of four; dead body, dead body with some shillings, survivor, and zombie.

If the corpse marker turns out to be a survivor the faction gets points for rescuing them. If the result is zombie then the faction member will have to fight the zombie.

This one is my own idea. I wanted to make use of one of the coaches that I have, and so I came up with this.

Briefly a gang is trying to smuggle out a quantity of Infernium and the factions have to stop them and take the Infernium for the themselves. The gang, which consists of a Guv'nor, 5 thugs and the coach are placed in the middle of the board, once the factions attack the gang they will move out the coach, and the factions will have to try and board the coach, take control of it and return it to their own deployment zone.

By chance I came across a homebrewed scenario for In Her Majesty's Name and thought that it would be ideal for Empire of the Dead.

The factions have been told that in a building/safe house (in the middle of the board) lies a hidden message of great importance. The factions need to get the faction members to the safe house first. However in the middle of each table quarter is a zombie spawning point, where zombies are. As soon as they see a faction member they will try to charge. So the factions will have to move carefully to try and avoid the gaze and thereby a possible attack of the zombies while at the same time trying to get to the safe house first.


If anyone is interested in trying out these let me know in the comments field.
Posted by Kaspar Olesen at 15:47 No comments:

During the last two weeks I have been working on making terrain for my first venture into colonial wargaming - The North West Frontier, and more precisely 1897 - Pathan Uprising. 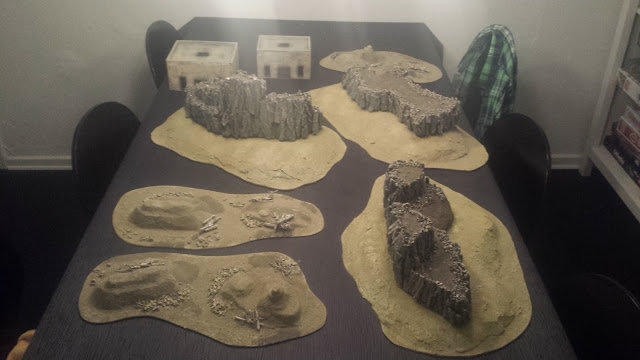 The incredibly rough terrain of the regions lends itself to having some mountainous terrain. Looking around at what other wargamers have done I found a lot of inspiration. I was however unsure about what materials I was going to use.

A rough storm in Denmark knocked down a tree in my parents garden and while cleaning up the mess the fallen tree had cause, my mother gathered the bark from the tree. This turned out to be very suitable as rocks. I cut out some shapes from cheap isolation foam and started hot glueing pieces of bark onto the foam. Afterwards I put on some polyfilla, to make the transition from the bark to the foam more natural, it also had the added bonus of giving the pieces some weight. 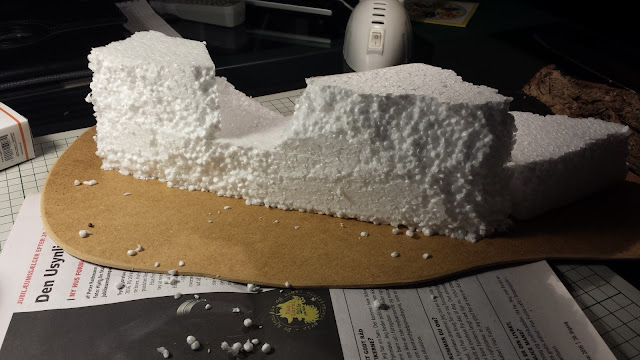 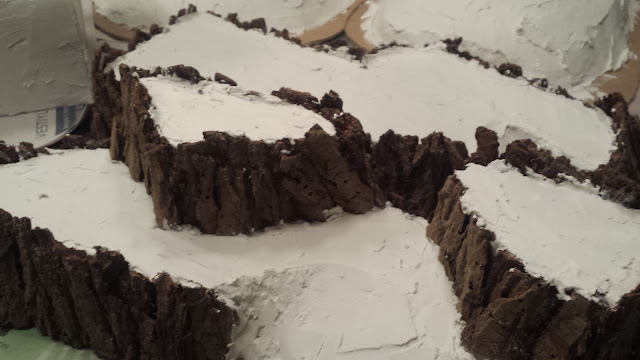 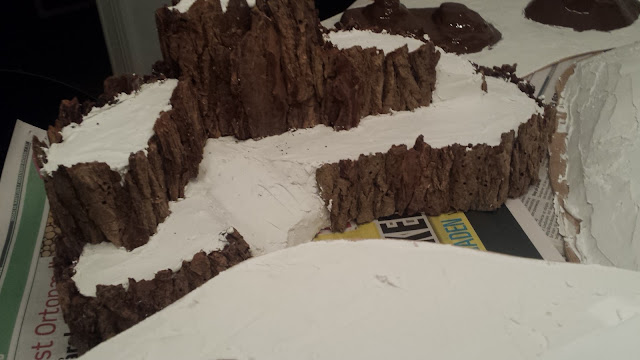 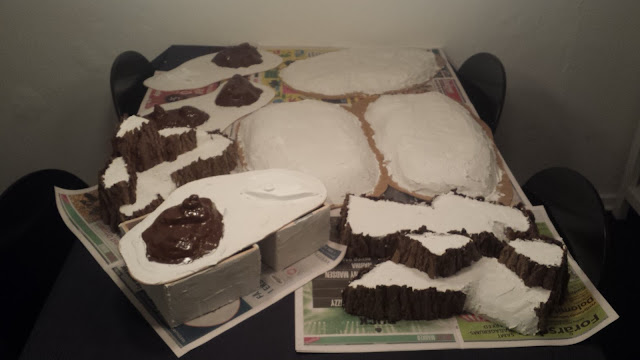 Everything with a layer of polyfilla.

Then came the painting which was easy but time consuming. As a last thing I added some small decorative stone that I had lying around to the inner edges of the pieces. 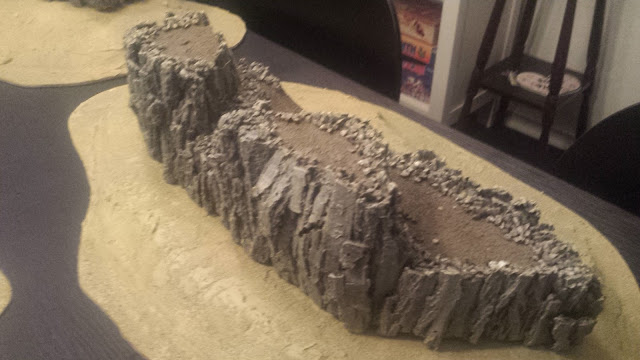 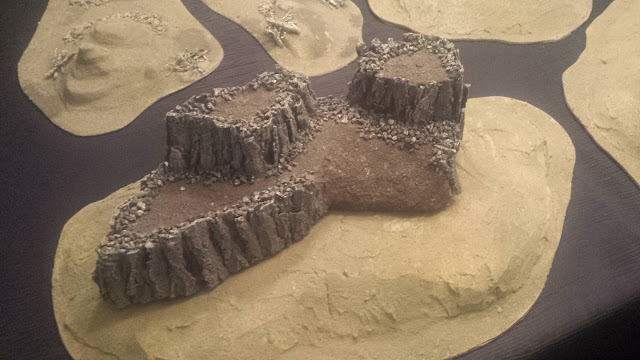 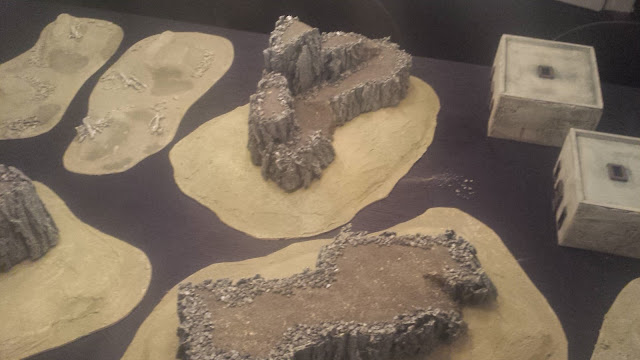 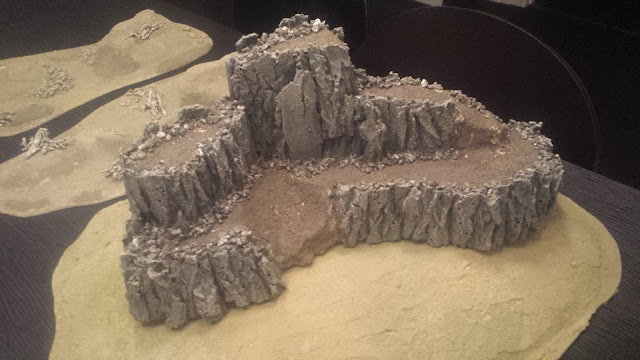 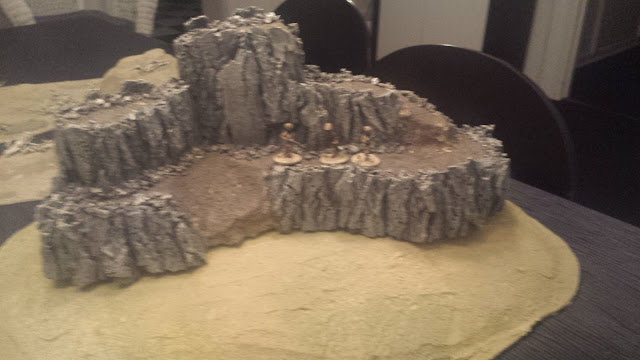 For each of the "mountains" I made a large hill so that they had added height and on the tabletop it will prevent them from looking like they have suddenly just bust through the ground. I again used cheap isolation foam that I covered in polyfilla, sanded and spray painted with different earth colours.

The rough terrain pieces are made from small Amera Plastic Mould hills that I bought some time ago. They have been mounted onto 3mm mdf bases and the entire base was covered with polyfilla, sanded and spray painted. I then added some small tree branches and some tea leaves that my girlfriend did not like the taste of. 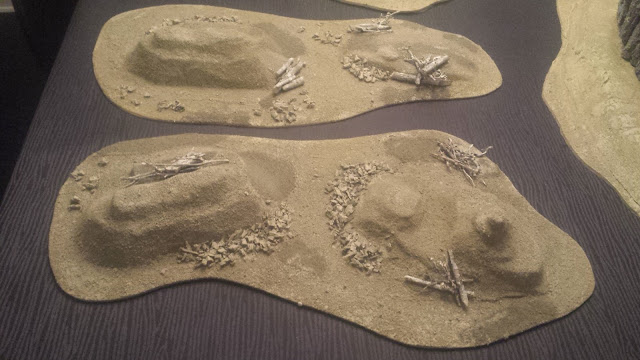 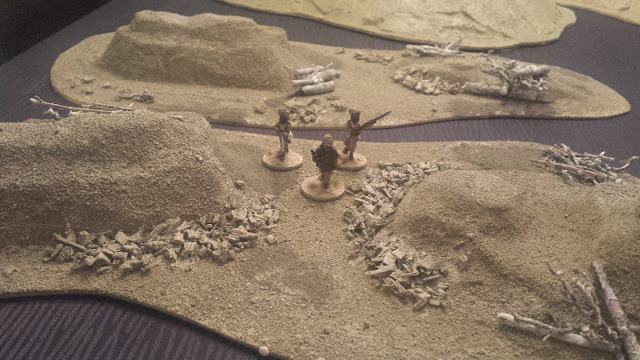 The final pieces of terrain where some Pathan buildings, which I made in almost the exact way as the Arab buildings that I made for SAGA C&C last year. This time though I added a removable roof for the buildings so that they can now hold figures inside. 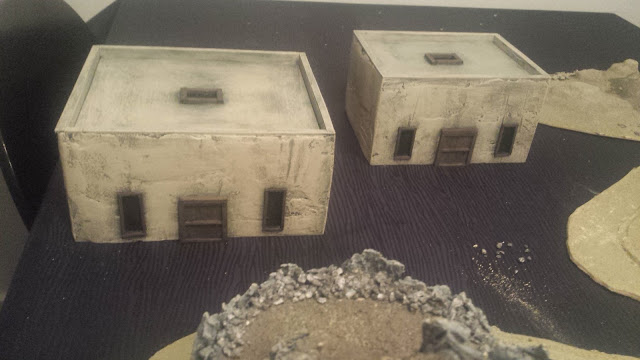 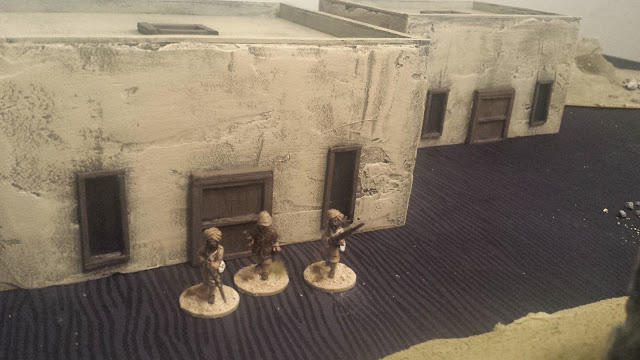 Once on the tabletop I will added some large rocks, trees and bushes and hopefully the board will look great and be playable at the same time. Now all I need is for my friend Frank to finish painting his Pathans, so that we can have a game.
Posted by Kaspar Olesen at 22:31 9 comments:

A lot of interesting things on the horizon

A few weeks since a post that was not about selling minis, but I have not been totally inactive. My youngest daughter christening and the preparations have taken some time though.

I have been hit by the big wargamers curse that is "ohh shiny...!", so right now I am trying to fend of interest in several projects, but so far not having too much luck.

Colonial - North West Frontier
My colonial North West Frontier project is still ticking a long slowly. My friend Frank is still painting his Pathans, while I have started work on some mountainous terrain - which is actually looking quite good. Shall have some pictures of the results within a few weeks.

Colonial - Darkest Africa
I have been inspired by the work of fellow blogger Happy Wanderer (https://agrabbagofgames.wordpress.com/) and his work on adapting the Muskets and Tomahawks rules for Darkest Africa. The inspiration has resulted in me buying two forces Force Publique and Arab Slavers that I should get shortly and which I am looking forward to painting,. This will very much be a hobby project of my own, as I fear none of my friends will be that eager to play. Been reading a lot about this conflicted period of time, and it really is interesting and traumatic at the same time.

Blood Eagle
The Viking skirmish rules Blood Eagle was released ahead of time and I received the rule book this week. As a Dane the Viking Age has always fascinated me and the rules that Charles and Craig have put together are simple and are easy to get the hang of. I don't have anything for this project yet in terms of minis and terrain, and I am unsure whether to take the plunge because of the news below. 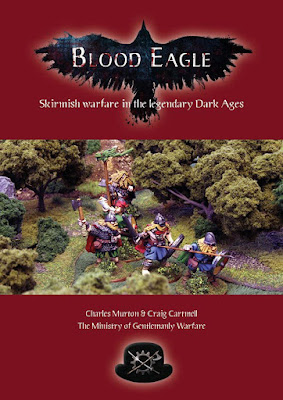 The Chicago Way
This week I found out about Great Escape Games new gangster skirmish game The Chicago Way due to be released at Salute. I have looked at Pulp Alley before for rules in which to run gangster games, but with both rules and miniatures becoming available I am very very tempted. The fact that my friend Chris is showing an interest is also a major factor. We are the best of friends and while both of us enjoy Empire of the Dead, I have been on the lookout for a project that both of us will invest in. 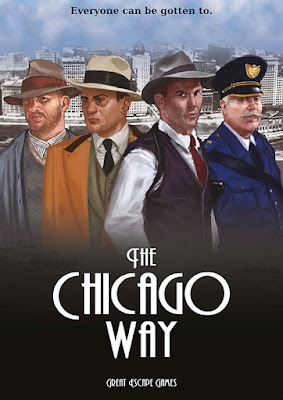 So a lot of games that have turned my head. I think that Blood Eagle might be the one to miss out, since I still play Empire of the Dead and Broken Legions - basically too many games and too little time.
Posted by Kaspar Olesen at 13:37 1 comment: