Broken Legions - Tears of the Oracle

Work and real life issues have kept me busy during the last couple of weeks, so not much has happened on the hobby front. Yesterday however Frank dropped by for a game of Broken Legions.

When we last played I had lost severely with my Dacians against his Romans. The defeat came not so much because of bad tactics or choices made on my behalf, but because of Frank's outrageous dice-rolling. It meant that I had had enough of Dacians for a while and I wowed that I would play a warband, which is not so depended on whether it is day or night.

So when yesterday arrived I opted for the Romans, while Frank gave debuts to his new gladiator models in a Sons of Spartacus warband. 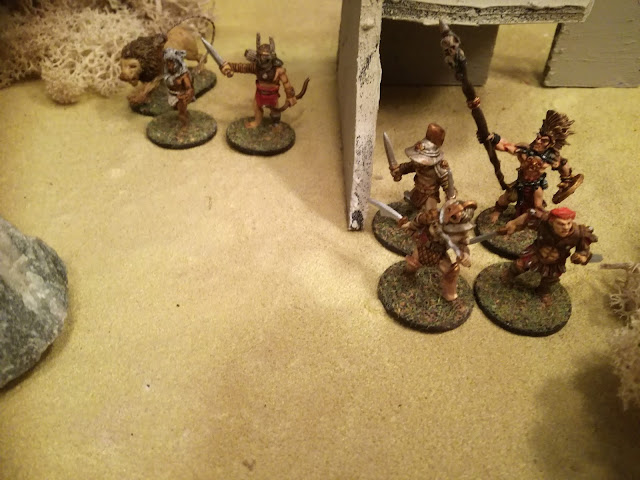 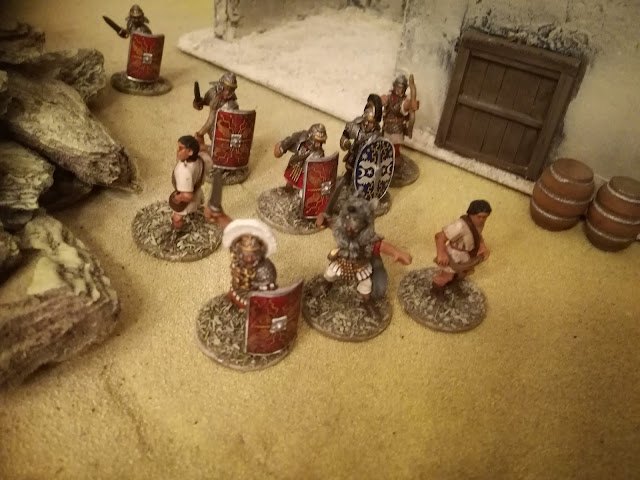 The warbands were as far as I remember the following:

Scenario
The scenario is once again lifted from Frostgrave, and has the warbands attempting to get their Leader into contact with a well in the center of the board. The well is said to contain the tears of an oracle and if a Leader comes into base contact with the well, the warband gains 5 XP, and a roll on the Entreat the Gods table. Two objectives were rolled and placed on the table. 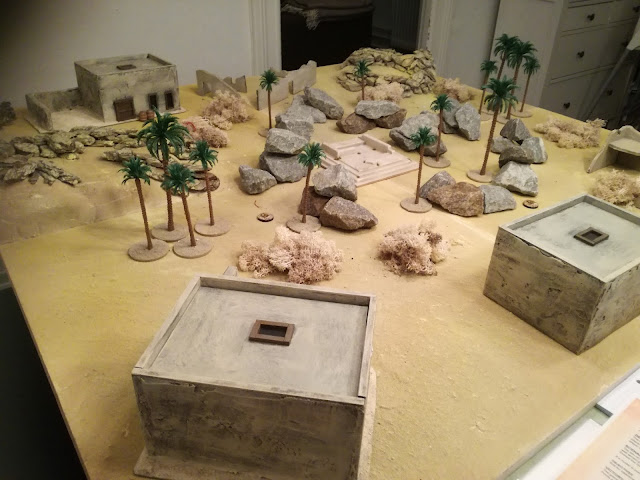 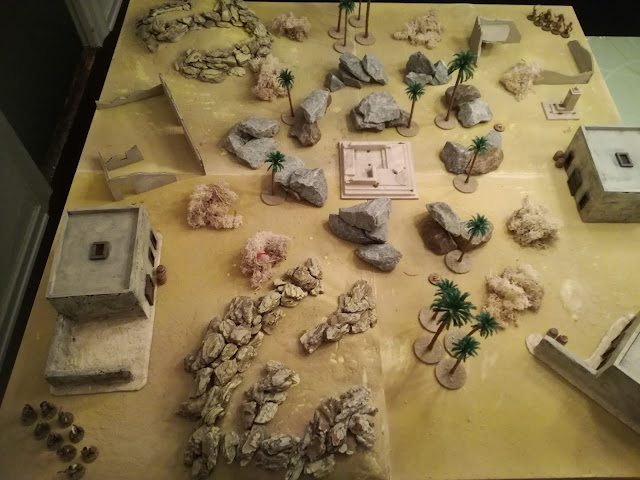 The Game
After deploying on opposite corners of the table both warbands began to move forward. The Soldiers of the Eagle won the Initiative in the first two rounds which meant that the Primus Pilum got into contact with the well first. The roll on the Entreat the Gods table was a 5 which meant that he gained a reroll for the turn and an extra action. This made it possible for the Primus Pilum to move to the other side of the well to try and prevent the Arena Champion from reaching the well.

The Arena Champion move around the Primus Pilum and reached the well, but rolled a 1, so he lost a Fate point, while and the Acolyte of Mars charged into the Primus Pilum. In the same round the gladiator with the longbow made the most of his Quickshot ability when he with two hits removed the Frumenatarius from the table. A Baleares put a wound on the gladiator, but the Numerus missed his shot. The Legionary and the Praetorian move into the vicinity of the well and where quickly in melee with the fierce gladiators. On the Roman left flank the Baleares, Numerus and a Legionary could see the Beastmaster and his Lion pet get into position.

This is when things started to go sour for me again. Despite my heavy armour I was unable to do anything when I kept rolling average and Frank rolled 9s and 10s on almost all rolls. One of my Legionary, now in melee with the Arena Champion managed to put two wounds on him, but that was the effect my attacking had. In order to protect the Numerus a Legionary put himself in between the Numerus and the Lion. While the Beastmaster hit with his whip attack my Numerus had a critical failure which meant that he could not shot for a round.

In the next round the Romans started falling to pieces. A Legionary fell to the Lion and Beastmaster, A Baleares was shot, another Legionary fell to a gladiator. In the next round the fleeing Numerus died from a whip attack while the second Baleares also fell. The Primus Pilum who so far had not managed to hit a single time, fell to the Acolyte of Mars and a gladiator.

Frank's outrageous dice rolling continued and in the end the Romans were left with the Praetorian and a Legionary, while the Sons of Spartacus had only had a single casualty. This was a complete annihilation, once again not because of tactics but because of dice rolling. The is no doubt the Sons of Spartacus is a fierce warband with their high Melee stat and numerous attacks, but still the dice rolling made all the difference, to the point were I did not need to roll, because the it was not possible to reach the same value. 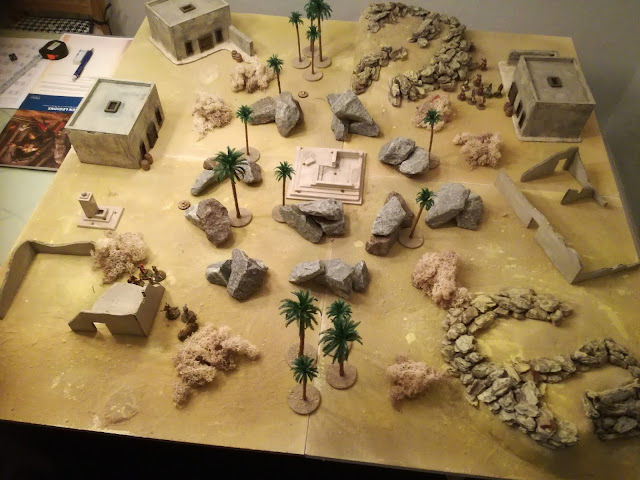 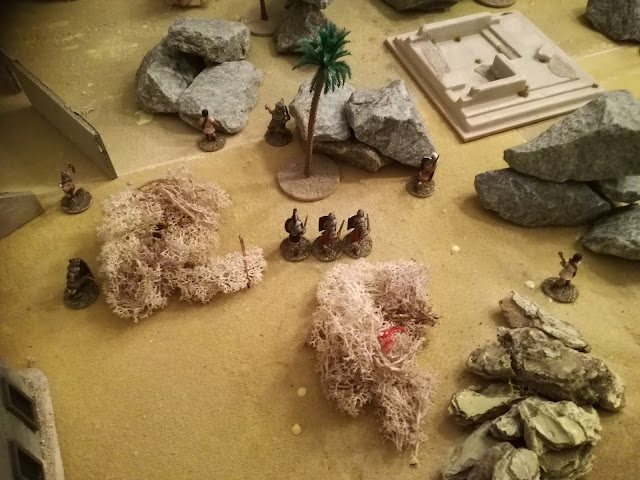 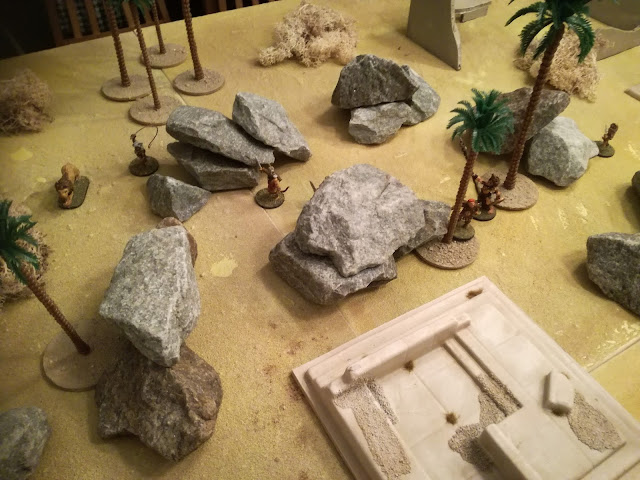 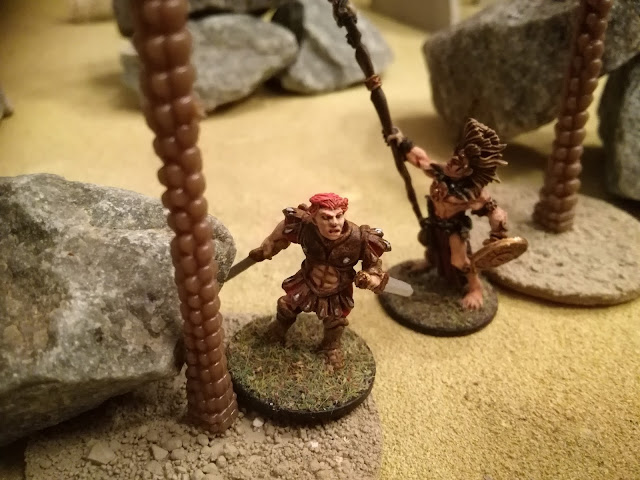 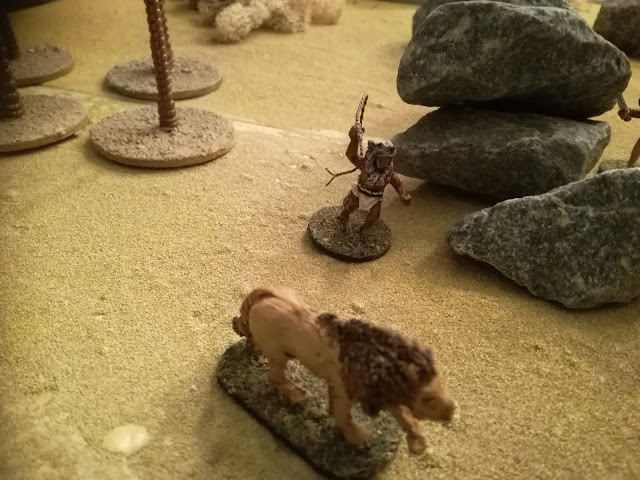 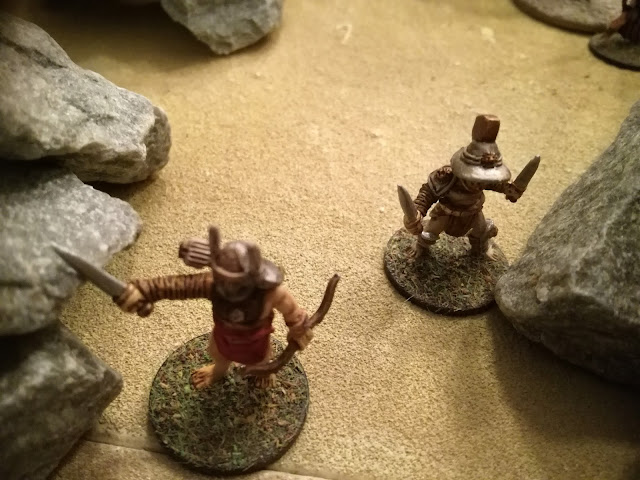 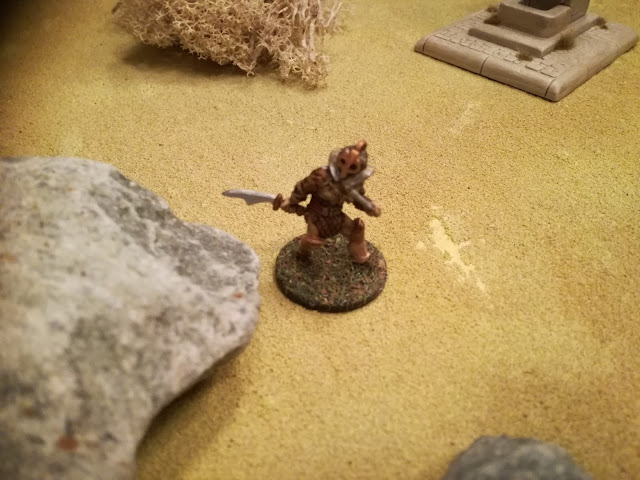 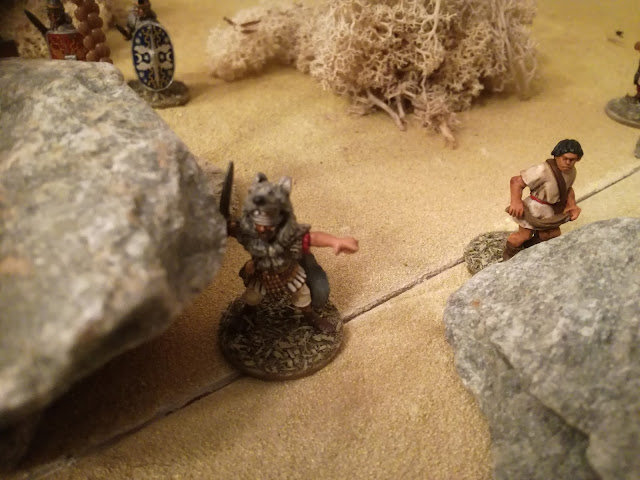 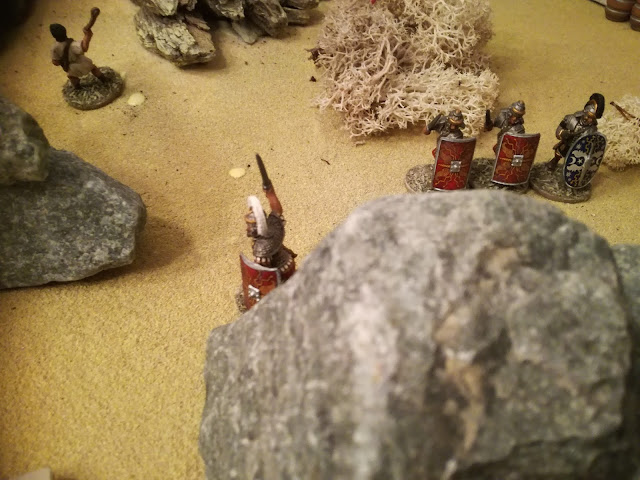 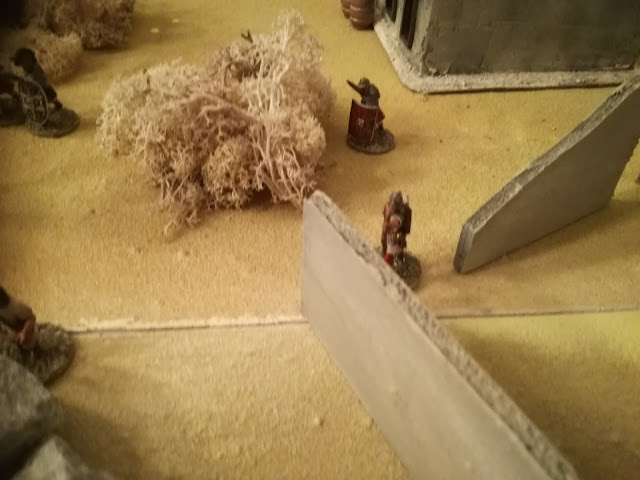 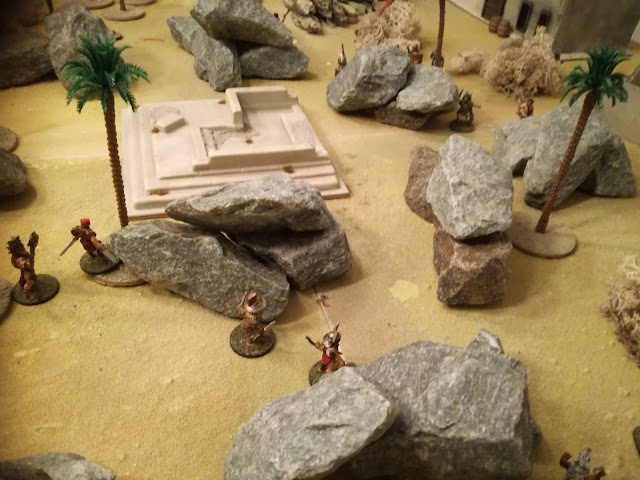 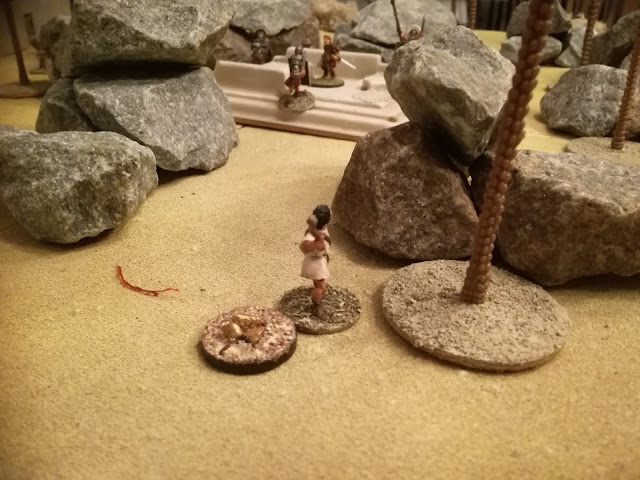 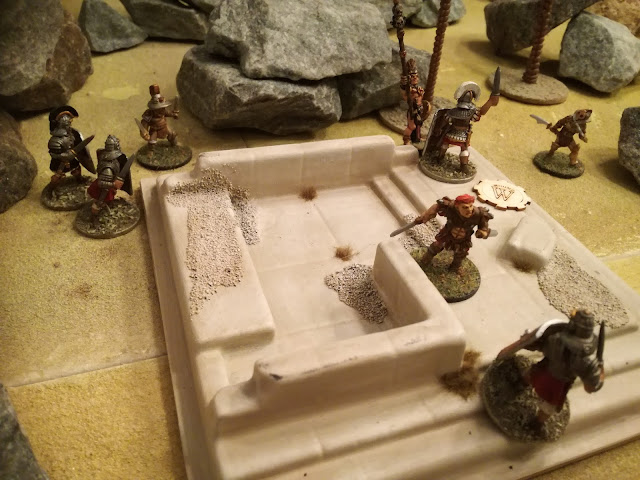 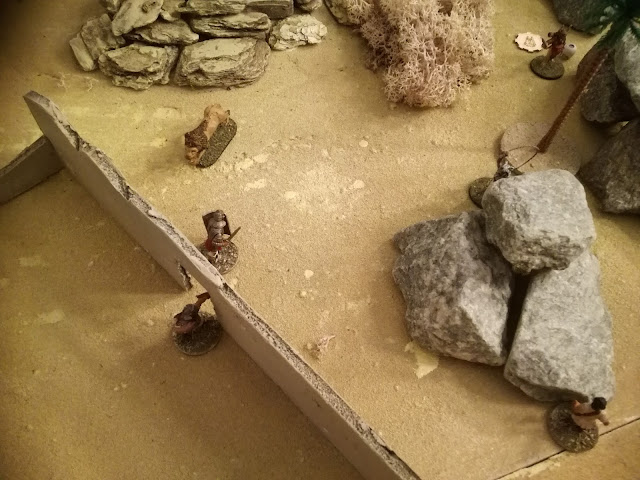 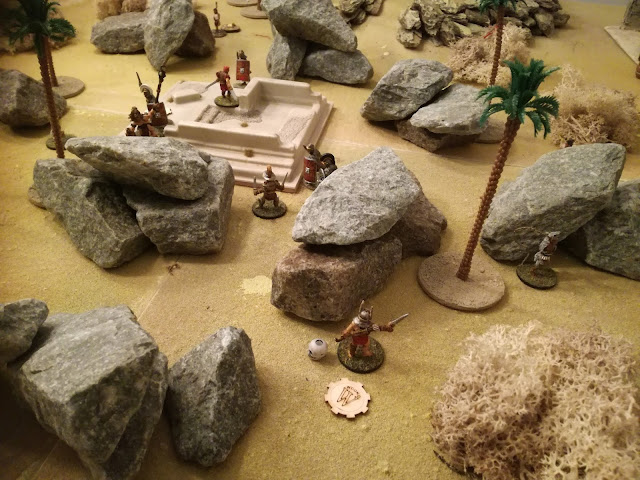 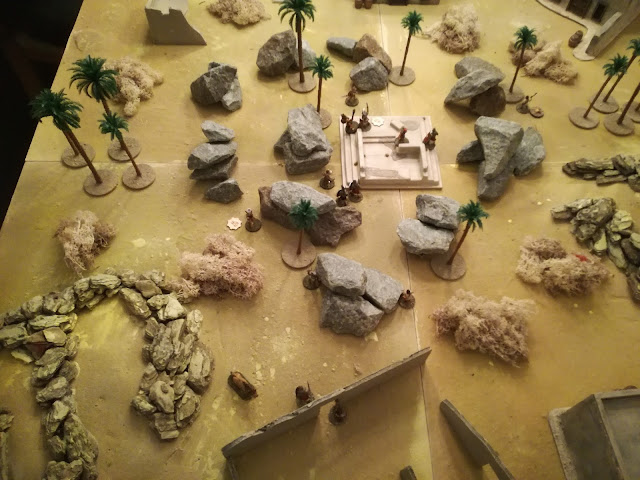 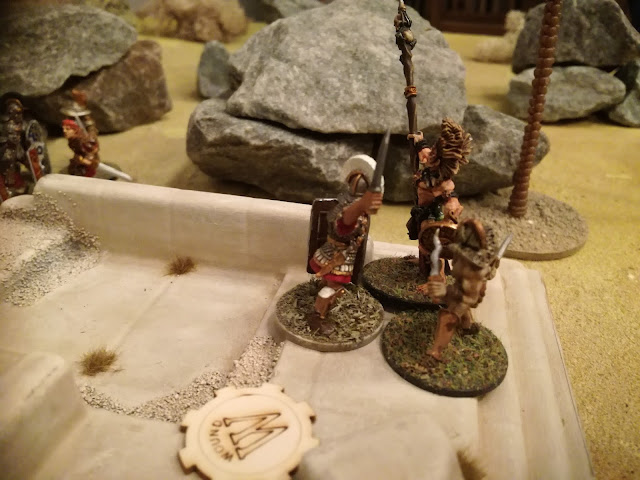 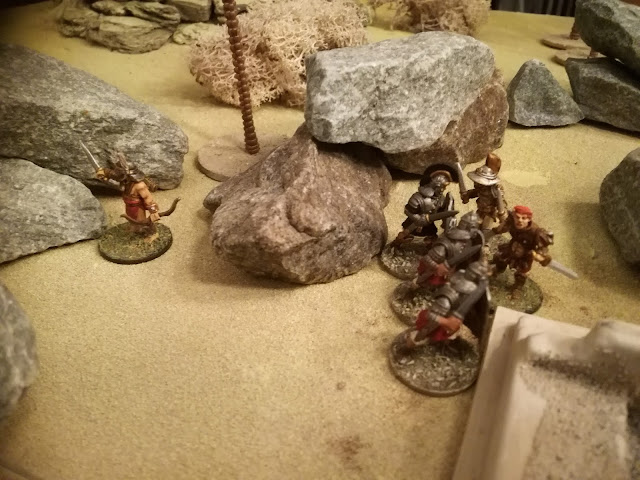 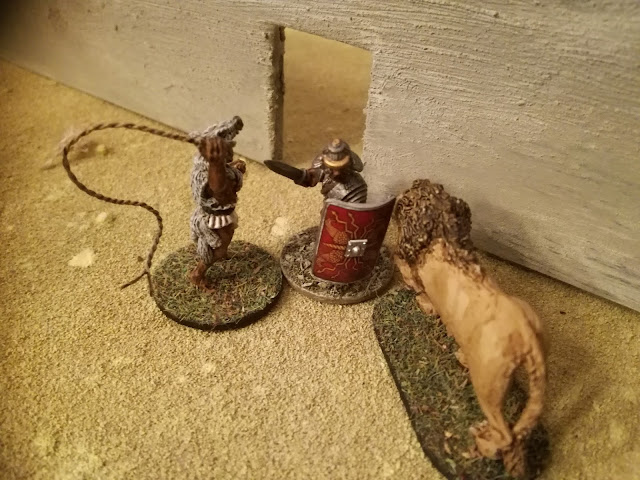 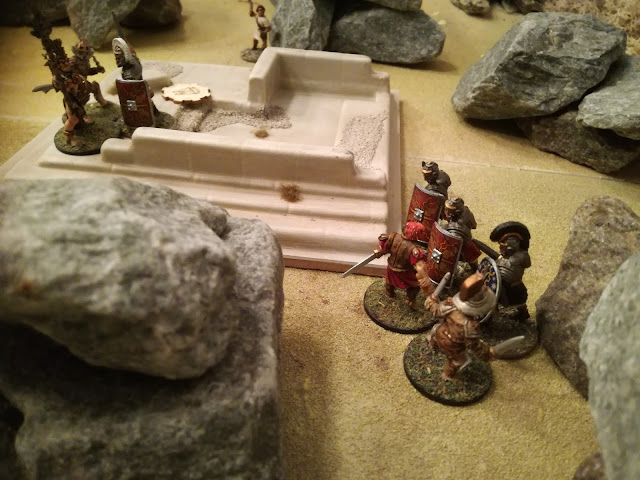 After the game we looked at how we could prevent one warband from running away from the other points wise. And I think we have found a solution. Some of the other rules we looked at were Injuries, Broken Tests, a new Heroic Ability and a move favourable Entreat the Gods table.

It was nice to try and play the Romans and to play against something else. In the end I lost a Legionary and my Primus Pilum has a minus 1 penalty to his dice rolling in the next game. Hopefully Frank's luck with the dice will at some point run out so that our games will become more even.
Posted by Kaspar Olesen at 11:31 2 comments: