Earlier in the year I made the mistake of not backing the Empire of the Dead Reqiuem Kickstarter, instead choosing the Acthung! Cthulhu RPG Kickstarter. So when the Requiem minis went on sale on westwinds website, I jumped at a chance to purchase some. To be honest I prefer the original boxed sets to most of the ones from Reqiuem, with the Bedlam Brotherhood being the pick of the bunch.

I had wanted to get one of the original starting boxed sets and chose The Brotherhood, partly because they seem different in the way the play and because I like the minis, especially the blister pack of Armed Monks. So I ended up ordering the boxed set and the blister pack with 4 armed monks.

That makes it 12 different minis for the Brotherhood, with many different weapon options, so I should have that faction covered by now. 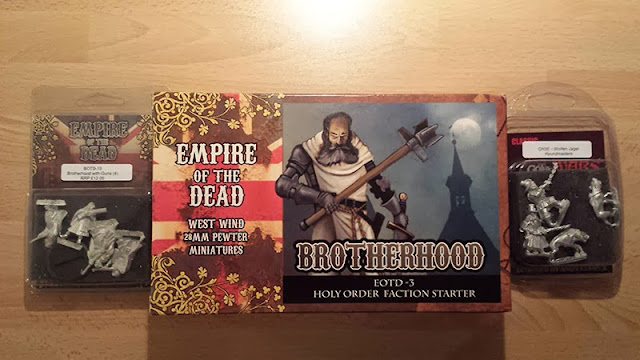 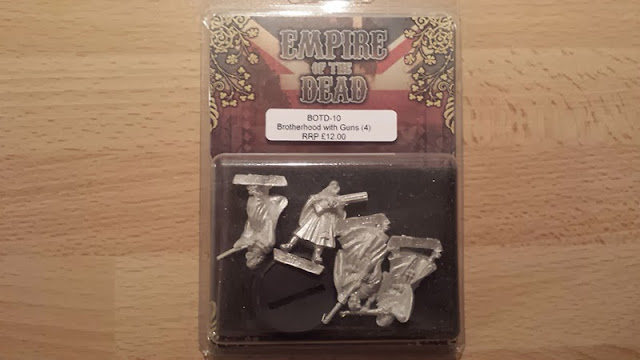 Normally I order from Firestorm Games, because the minis are slightly cheaper and with an order for £30+ shipment is free. This time I ordered directly from Westwind, because that was the only place I could get the armed monks. I did however use the opportunity to also get the Wolfen Jaeger Houndmasters from the old Vampire Wars collection. As readers of the blog will know I have the original four Wolfen Jaegers and have enjoyed playing them in EotD. 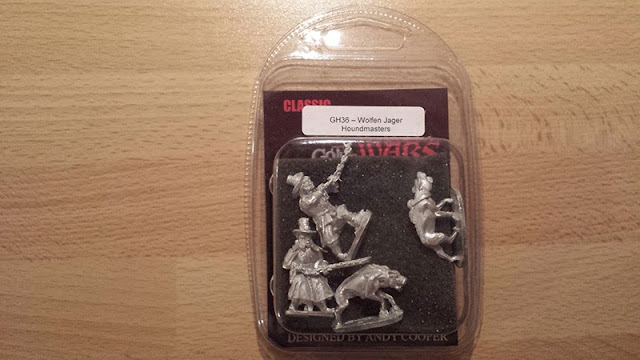 While I love the Houndmaster minis, I also have problems with them, because of the lack of rules that can apply to these particular minis. I have written about this on the lead-adventure forum, but have yet to find an answer to the rules that I like.

The minis
The minis are everywhere I have seen placed on a large base - meaning that a houndmaster and the wolfhound share the same base. Looking at the minis themselves this is very much how they seem to have been envisioned.

Solution scenarios
I have received two suggestions for a solution, but like I said neither of them have really grabbed me, as they both suggest putting the houndmaster and wolfhound on separate bases.

1) The minis have absolutely no connection with each another and the houndmasters will be normal members, who just don't have any visible weapons.

Out of the two I much prefer solution no. 2, as there is still a connection between the minis, but I still does not grab me entirely. The fact that they are on separate bases is still an issue for me, as I think the houndmaster minis will look stupid. I have not looked into whether I can convert the houndmaster, so that they are armed.

The third option is of course to come up with rules that I like, and which will keep the houndmaster and wolfhound on the same base. This is an idea that I also posted on lead-adventure, but which received no comments:

"....maybe something about movement. Dogs getting a bonus to their charge for every round they are still being handled - basically they will be more aggresive because they have been held back by the handler.
The handler is also only able to use one-handed weapons while handling the dogs.

Or maybe they should just stay together all the time. Being able to shot, but really most efficient in melee because both the hound and handler will be able to attack."

I have started wokring on the Brotherhood monks, so I have some time before I start working on them, but I need a solution soon...hmmm...

So if you have a good idea of how to use the Wolfen Jaeger Houndmaster minis in EotD, please comment. And of course feel free to comment anyway :-)